SUPPORT THE USPS AND YOUR RIGHT TO VOTE:

An art demonstration to support the 225-year-old United States Postal Service & the right to VOTE!

In light of the threat to our postal service, at a time that could jeopardize the democracy of the country, let’s join forces with Mark Mothersbaugh and Beatie Wolfe for this collective postcard art demonstration.

Artistic visionaries Mark Mothersbaugh and Beatie Wolfe share a love of tangible artforms, in and amongst their futuristic explorations.

In light of the threat to our 225yr old postal service, at a time that could jeopardize the democracy of the country, Mothersbaugh and Wolfe join forces for this collective postcard art demonstration.

The aim of this campaign is to encourage as many people as possible to support USPS (at this critical time), our right to vote, and democracy as a whole via the power of art. The demonstration asks you to buy USPS stamps, design a postcard and then mail it to 8760 Sunset Blvd, West Hollywood, CA 90069.

The postcards will become part of a collective art piece – presented in both a physical gallery and virtual space – art directed by Mothersbaugh and Wolfe.

“Lockdown has reminded me of the joy and importance of physical correspondence so showing our support for this vital institution (USPS) at this crisis point is paramount. And what better way to do it than via the power of art.” – Beatie Wolfe

“The post office is one of this country’s oldest institutions. Since 1775 we have relied on and trusted the USPO to connect us, to hold safe our documents, personal thoughts or objects of vital importance until they reach their intended destination. The threat now facing the USPO seems to shake our foundation and challenge rights that have, up until now, have been inherent. The fact that this has happened in this country not only needs to be documented but it needs to be questioned and commented on. What better way than to use the very system of the USPO as proof of concept that if we protest through art and connection, we not only capture this moment, we create a movement and we preserve it for posterity.” – Mark Mothersbaugh

How to Join the Demonstration: 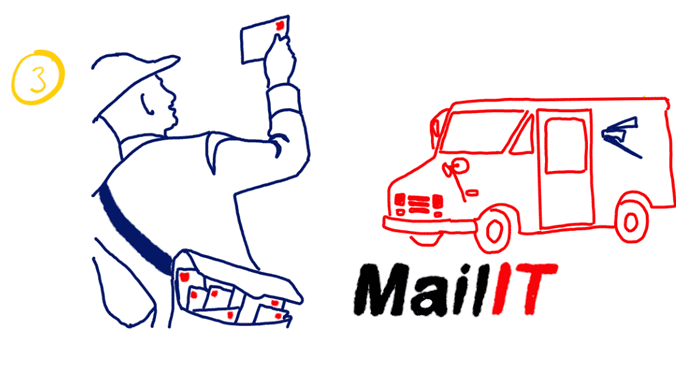 Want to see some postcard examples and learn more about how you can participate? Visit postartfordemocracy.com.

As a young art student at Kent State University, Mothersbaugh first started making postcard art in the early 70s and exchanging work with known and unknown artists alike. Through these exchanges, he realized that he was creating an image bank and a lyric collection that served as a basis of inspiration that he would later use in the creation of his seminal art-rock band, DEVO.

Since then, he has filled over 490 archival volumes of 100 cards each. These cards became the basis of his most recent show Myopia, a retrospective beginning in 2015 focusing on modern man’s ongoing, internal dialogue of beatnik stream of consciousness poetry, the surrendering of the intellect to the primordial and science vs. faith.

Mark has shown his visual art in over 125 solo exhibits over the last 35 years, with touring shows Homeland Invasion, Beautiful Mutants, and Myopia, a 3,000 object retrospective in 2015. His art has been featured on numerous books, album art and consumer products. He has collaborated musically with artists such as Brian Eno, David Bowie, Iggy Pop, Beck, The B52s and Neil Young to name a few.

He was given an honorary doctorate of humanitarian letters from Kent State in 2008. For more, visit: www.markmothersbaughart.com

“Musical weirdo and visionary” Beatie Wolfe is an artist who has beamed her music into space, been appointed a UN Women role model for innovation, and held an acclaimed solo exhibition of her ‘world first’ album designs at the Victoria & Albert Museum.

Named by WIRED Magazine as one of “22 people changing the world,” singer-songwriter and innovator Beatie Wolfe is at the forefront of pioneering new formats for music that bridge the physical and digital, which include: a 3D theatre for the palm of your hand; a wearable record jacket — cut by Bowie/ Hendrix’s tailor out of fabric woven with Wolfe’s music — and most recently an ‘anti-stream’ from the quietest room on earth and space beam via the Big Bang horn.

The Barbican recently commissioned a documentary about Beatie Wolfe’s pioneering work titled Orange Juice for the Ears: From Space Beams to Anti-Streams and Wolfe’s latest innovation is an environmental protest piece built using 800,000 years of historic data that will be premiered at the London Design Biennale in 2021. For more info, visit: www.beatiewolfe.com