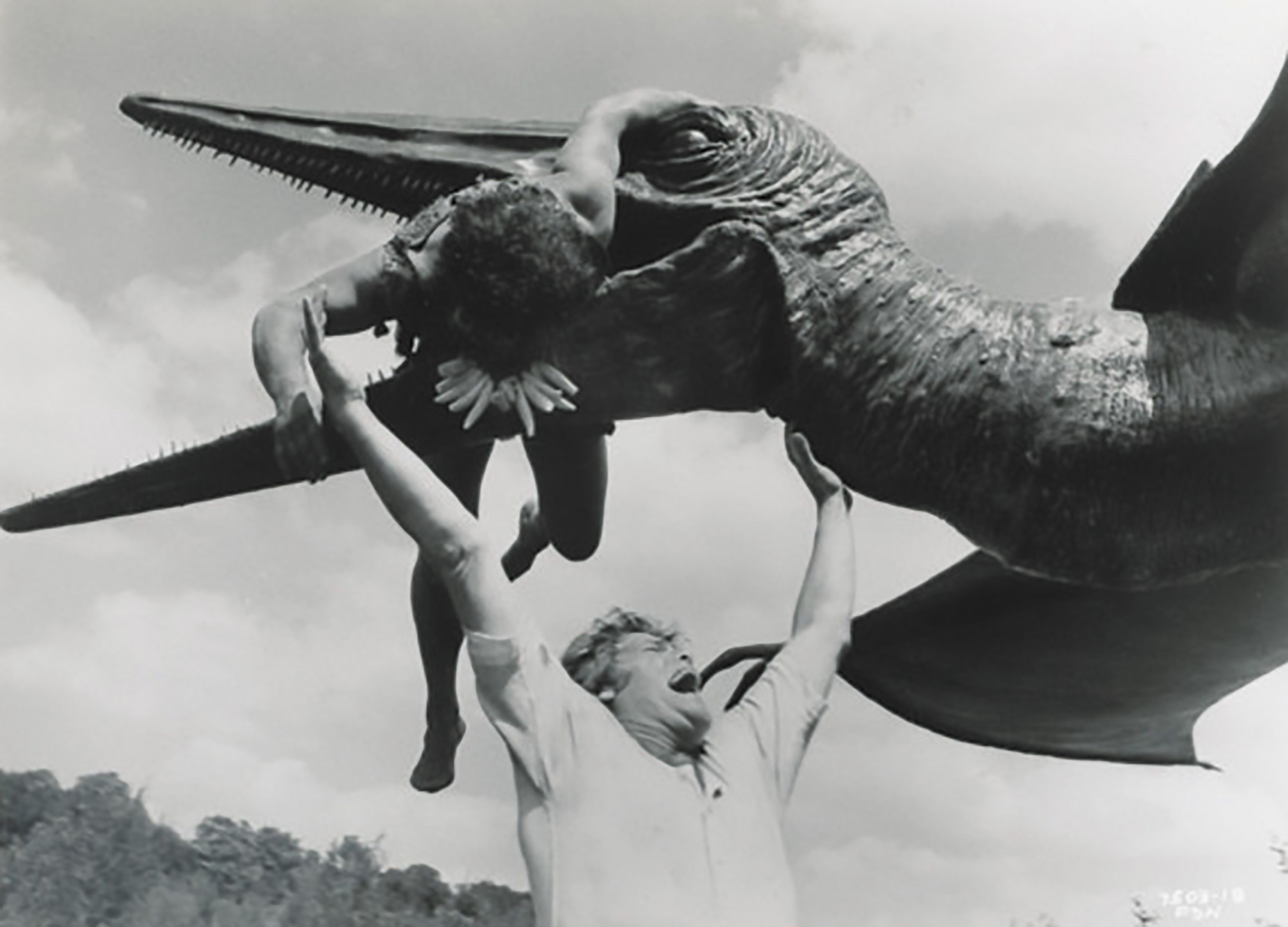 April, year of our Birdy eighteen hundred and ninety. Two prospectors minding their own business chewing cactus bits into boot nails are beset by a bat-winged, gator-faced skin boomerang skidding over the Arizona desert, and kicking up the kind of dust storm rarely recalled outside of tall tales slipped sidewise from the mouths of harpsichord noodling saloon enthusiasts. As would any acolyte of the Winchester rifle raised to alarm, these fierce badlanders mustered to a shouted “them’s fightin’ birds” and emptied their guns into the soaring monstrosity, downing it after several volleys. The carcass was dragged back to town and pinned to a barn wall like a Starship Troopers-sized bug collection specimen, and a wandering newsman snapped a photo that later circulated via the Tombstone Epitaph — the first and last paper founded with the mission statement: all exclusives, all obituaries —  which began one of the greatest mysteries to emerge from the hard tack chewin’ history of the American West.

Speculation about the creature ran rampant. Could it be one of the Thunderbirds of Indigenous legend? Was it complete fiction manufactured by scheming rodeo clowns? Perhaps a hairless rat scooped by a bird time slipped through a split uranium atom at Trinity to become a recombinant malformation altered by that golden age of sci-fi kaiju radiation. Decades would pass before others of its ilk were unearthed and clues regarding the strange monster’s origin emerged.

Science has largely come to final terms with the age of the thunder lizards. The dinosaurs have been consigned to the smoke-choked ashes of a time impeded by a cosmic gallstone expelled at the speed of extinction from some unnamed stellar catastrophe innumerable solar systems away. Dashing figures clad in lab coats spotted with moon dust will tell you this is common knowledge. A small, untrustworthy few grinning through life beneath untroubled brows will tell you they never even existed and by the way, here’s some exciting literature about the letter Q. Both, if you’re willing to reconnect with the love and imagination of yourself as a child stretching the tape in your promotional Dino-Riders VHS until the incredibly sad day that it breaks and you learn what True Grief is, are dead wrong. Sightings of pterodactyls permeate our history. The preponderance of them are relegated to the United States though an account from Bali has a twin-engine plane in a game of chicken with a wide ranging ropen, Papua New Guinea’s giant monkey-visaged bat that apparently also carries the absolute brass guano glands to go mano à metal with a dual prop sky bullet.

As recently as January of this year, a woman spotted a pterosaur in Raleigh, NC and this time, not while microdosing during a Jurassic Park marathon. Vet tech student Cynthia Lee caught the diamond-tailed dino flyer twice, though the second time was from an Uber to work, so we can’t rule out the possibility that she was dissipating awkward silence with the long hallowed Carolinian ice breaker, “Spit in a sock, you see that wang dang dino?!” Her mother and uncle claimed to have seen a pterosaur in the same area when they were children before being summarily dismissed to pick switches. Not because they’d seen a cretaceous remnant flitting across the cumulous mounds on the horizon; just because child rearing and preventative violence were interchangeable concepts until the mid nineties.

According to cryptozoologist Jonathan Whitcomb, author of several books on the subject of modern pterosaurs and also one called Beat That Kid in Chess (yes, really), North Carolina, along with Texas, Kentucky, Utah and California is among America’s top hotspots for dinosaur sightings. In Charlotte an unidentified man and his equally mysterious cousin witnessed what they referred to as a “dragon” with a crested head and a bulbous tail gliding over the city, presumably dropping into an episode of Southern Charm just to see if that one woman descended from John Calhoun was gonna say something racist again (spoiler: she does). In Asheville a car was buzzed by a strange shape described by the driver as a giant featherless bird with sharp features. Jacksonville, too, has a pale green creature zooming around, though no word on whether or not it has similarly photo-ready cheekbones.

Could there be a surviving remnant of another epoch sipping morning mint juleps come Derby Day? Or conversely has some sinister force pulled an undead We’re Back! and if so do we need to employ the services of a velocipastor to exorcise these prehistoric revenants? Common sense says no, of course not, but the child that lives in my heart continues to murmur its wish that against all odds there’s still one out there somewhere, warbling the lizard song of a lost age into the biosphere.

And if it is in hiding, when we find it, I’d very much like to ride it.