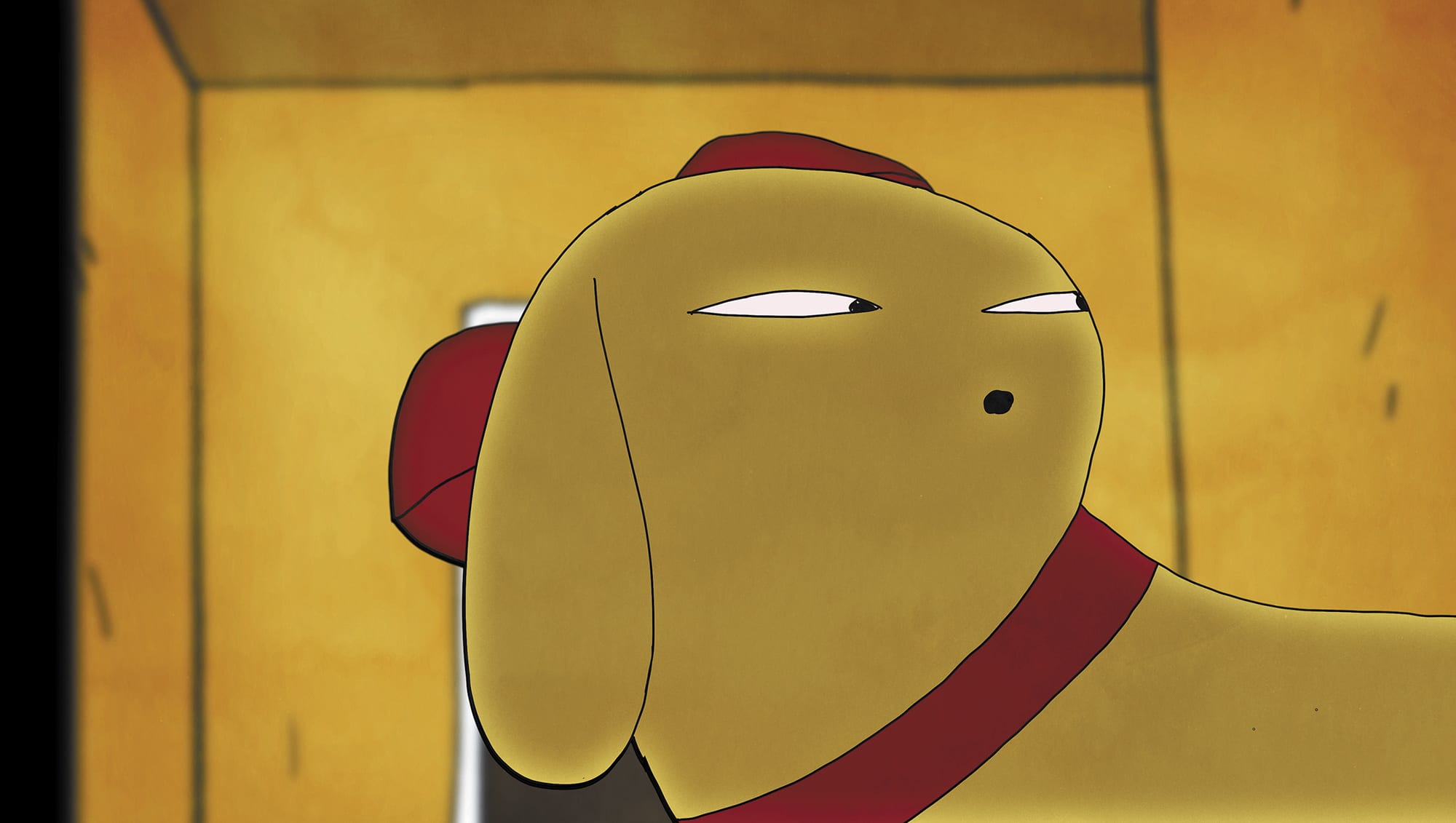 Denver filmmaker Joe Cappa was deservedly accepted into the recent 2021 Sundance Film Festival with his mind-bending, animated horror, Ghost Dogs. His 11-minute film was showcased in Sundance’s Short Films Program and was one of 10 animated films selected from a pool of 9,933 short film submissions from 27 countries. The flagship release from the newly founded animation studio Great Question, Ghost Dogs took Joe on a two year journey of creation, and he’s here to talk about it.

How long have you been a Denver resident and what are your favorite aspects about living in Colorado?

I moved to Denver almost eight years ago from Oklahoma City. I quit my job at an ad agency to do my own thing here. Denver just always seemed like a chill place to live. Colorado is a cool state to explore. I’m an introverted animator who’s holed up in my house all day so it’s nice living in a place where I can escape to the mountains for a nice hike or a backpacking or camping trip. This state is a great place to recharge the batteries.

What is your first memory of making art?

I mean I’ve always been artistically driven. But I have a distinct memory of being 5 years old, and watching my dad draw a gladiator dude. I remember just being fascinated at how he was able to just pull this character from thin air. If I looked at that drawing now, I’d probably laugh. But yeah, I was that kid who could draw dinosaurs VERY well in elementary school. 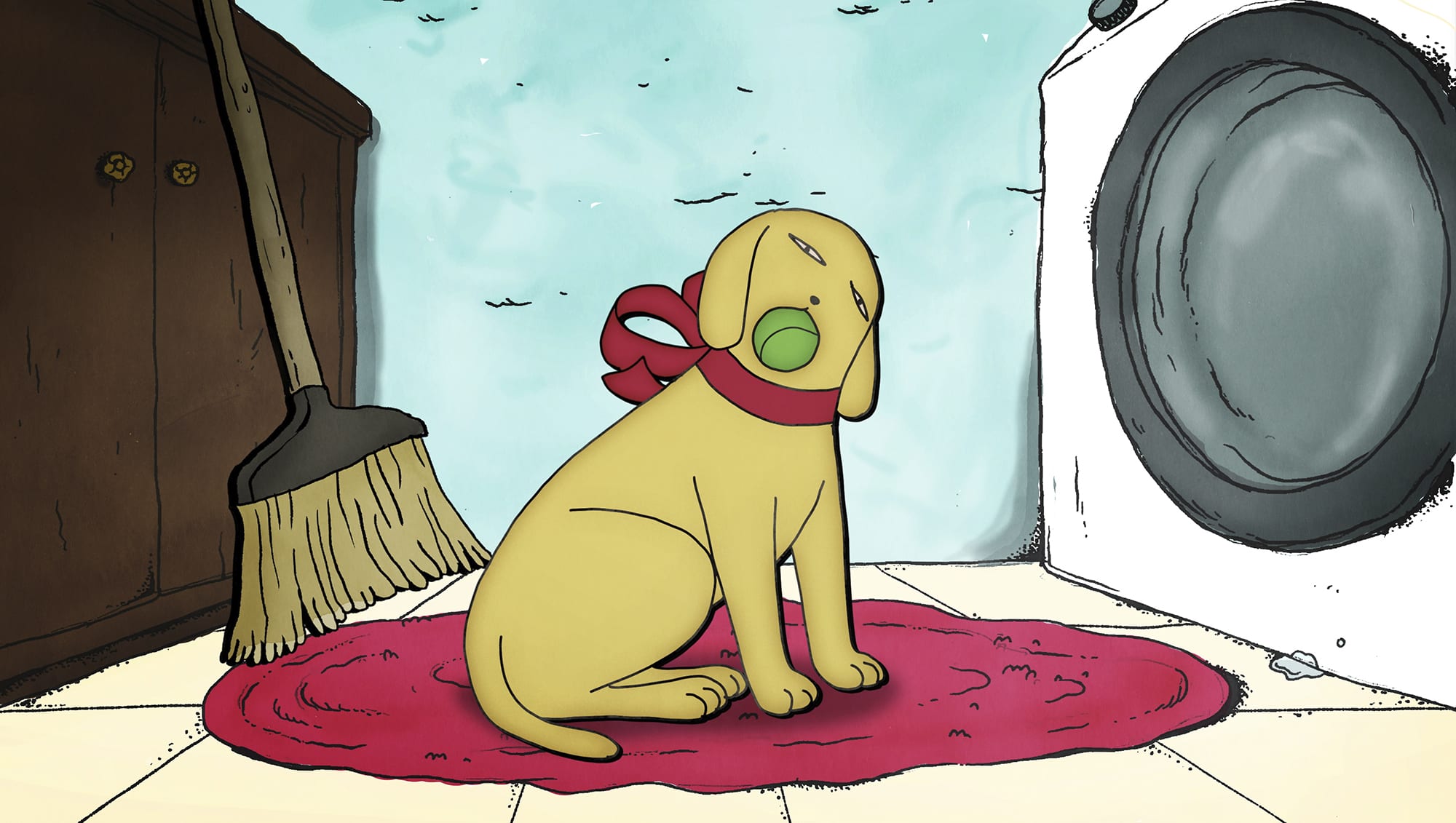 Your art is colorful and surreal with both funny and creepy elements to it. What do you hope people take away from experiencing your work?

I think you nailed it. When I look back at all of my work I see a common theme of humor and creepiness running throughout most of the pieces. It’s important for any medium to elicit conflicting emotional reactions, because I think it encapsulates the absurdity of life so well. But that might be a bullshit, hifalutin answer. Personally, it’s very enjoyable to see people’s reactions while watching my stuff. Where I can see someone working out how they should be feeling in their brain. And I love, love films that pull off that emotional somersault effortlessly. There’s no better sensation while watching a movie than when it tricks you into feeling a certain way, and then flips that emotion on its head. Someone told me watching Ghost Dogs was a rollercoaster of dread and humor, which is probably the best compliment a director could receive.

What inspired you to make Ghost Dogs?

Ever since I can remember I’ve had recurring dreams where I’m lost in a haunted house. I have a strange, mixed-up, emotional attachment to these places that I knew I needed to share with the world before I died. There’s just something about a brightly lit house with a storm going on outside. There’s just something about it, haha. I can’t put it into words. There’s a scene in a Star Wars movie where young Obi- Wan visits a cloning facility on some dark and stormy ocean planet. He walks inside and it’s all white and sterile with a storm raging outside. I remember watching that and going, “Yes! That feeling! Exactly!”

Is this 11-minute film your first foray into animation?

Ghost Dogs was my first big passion project. Typically, if I come up with an idea I really like, I’ll go ahead and make the thing if it can be done in less than three days. Ghost Dogs was a two year-long project. The main reason I decided to embark on this journey was to teach myself frame-by-frame animation. I had done stop motion, but I’d never done cel animation where I basically draw every frame. I bought The Animator’s Survival Kit by Richard Williams and got cracking on Ghost Dogs.

The secondary reason I decided to make Ghost Dogs is because I thought God blessed me with a brilliant idea — A rescue pup is haunted by the family’s deceased pets. I knew if I didn’t make this film, someone else would and squander what it could be! So I had to be sure I took the time and effort to give the idea justice. 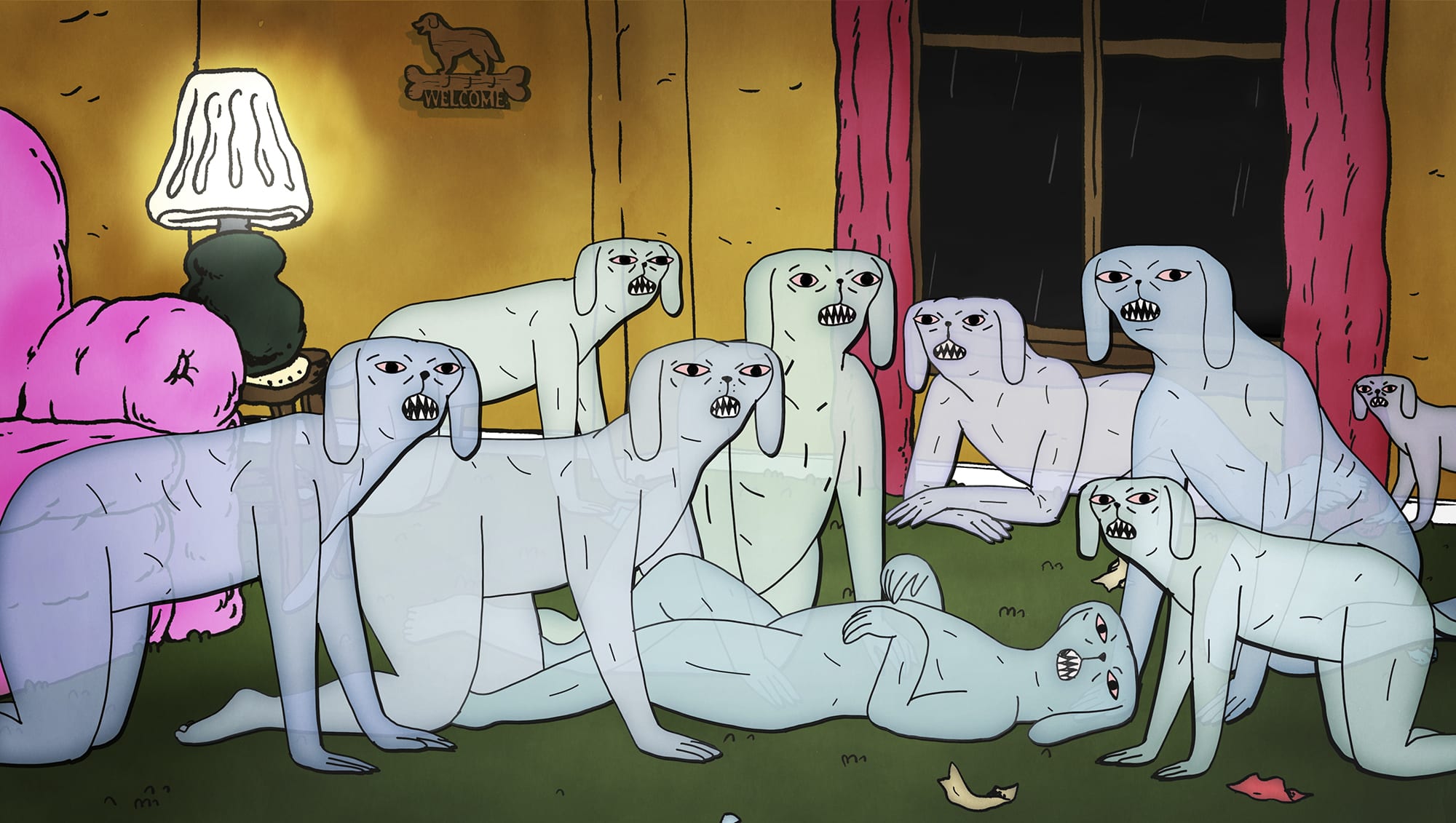 Any plans or hopes to turn Ghost Dogs into a feature-length film or an animated series?

My producer J.W. and I are coming up with a bunch of ideas of where to take the Ghost Dogs universe when studios reach out. A Ghost Dogs feature is something I personally would love to watch, but I don’t know a lot of successful horror cartoons out there. I’m not sure if there’s a market for that right now. It might be an untapped genre.

The music is superb, complimenting your art and creates a rich, layered atmosphere to the story. What was the process of scoring Ghost Dogs?

Oh man the music in Ghost Dogs is everything. My boy, Nick Poss created most of the music. It was very important to me for the music to sound professional. A film with an incredible script, amazing actors and beautiful cinematography will look like a Hallmark Original if the music is half-assed. I’ve shot a couple movies for Mickey Reece, who’s kind of a star in the indie film scene right now. He used Nick Poss on his last five films so I knew he could deliver.

I gave Nick the rough animation and told him what sound cues I liked from Mickey’s previous movies and other movie scores I liked — The Shining, The Witch, Cape Fear. You know, the good stuff! Nick came back with a score that I just wasn’t feeling. I dreaded giving Nick notes, because I wasn’t paying him very much. Nick took the notes and sent back a revised score that made my heart explode. I had initially envisioned Ghost Dogs to be a lot of room tone with minimal music, but as the film took its final form I realized it needed a lot more sounds. I asked Nick just to give me a bunch of random dissonant noises which I was then able to arrange in the editing process. I’m so happy with how it turned out.

Captivating from beginning to end, the story unfolds in unexpected ways. How important was the editing process to telling your story and realizing your vision of this film?

Thank you so much. Writing the story of Ghost Dogs was all done in the storyboard process. It was a matter of drawing a shot and then figuring out how interesting I could make the next shot, until I had an 11-minute story. Most cartoonists make an animatic which is a series of storyboard shots edited together in a video to give the filmmakers a rough idea of how scenes play out. I just didn’t have time for that! You learn about these animation processes and think to yourself, that process seems pointless. I can do it my way, and then you realize months later why everyone does it that way. I didn’t know what I had until waaaaay late in the project. Thank God it came out okay, but it would have saved me so much anxiety and editing, and re-editing if I had made those animatics. 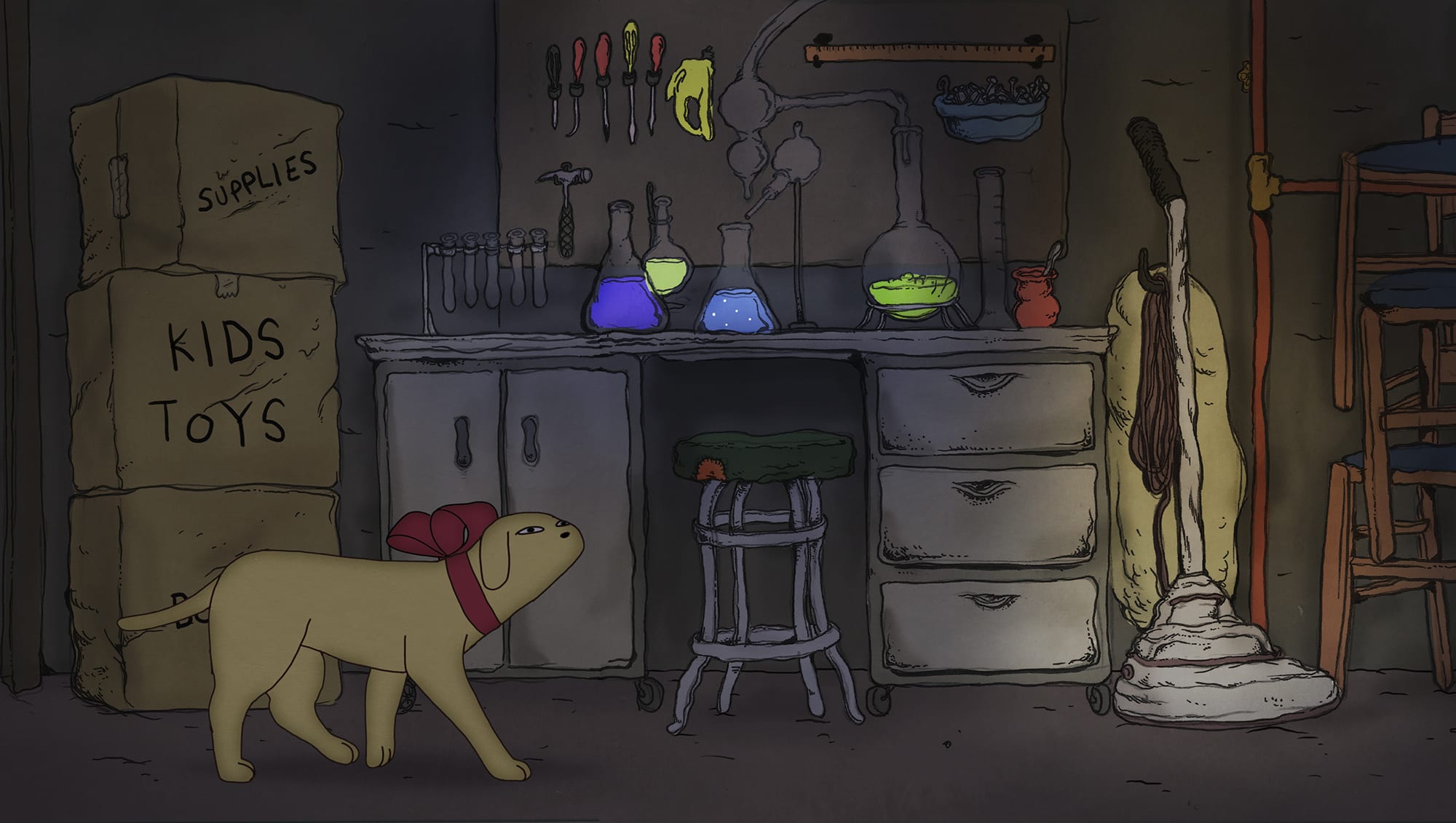 How does it feel to have Ghost Dogs selected for Sundance Film Festival 2021?

It’s an amazing feeling. Sundance aside, I’m very proud of Ghost Dogs, and proud that I went on this two year journey to get it done. Two years is a long time to spend on a passion project. It’s two years of second guessing everything. Not just creative choices, but my own life choices! Getting the call from Sundance just made everything worth it. Let’s keep this gravy train rolling.

Any goals or projects on your horizon?

I’m currently in talks with an animation studio for a series, but I have no idea where that’s going to go. I’m also animating a pilot for these two writers. I think it should be pretty funny when it’s finished. Beyond that, I paint a lot of these guys called “creepy dudes.” They haven’t been given their fair do, so I plan on making something with them when the time is right. They are ugly as sin, but they live in a world full of laughter, love and theme parks. I think that’s what the world needs right now. 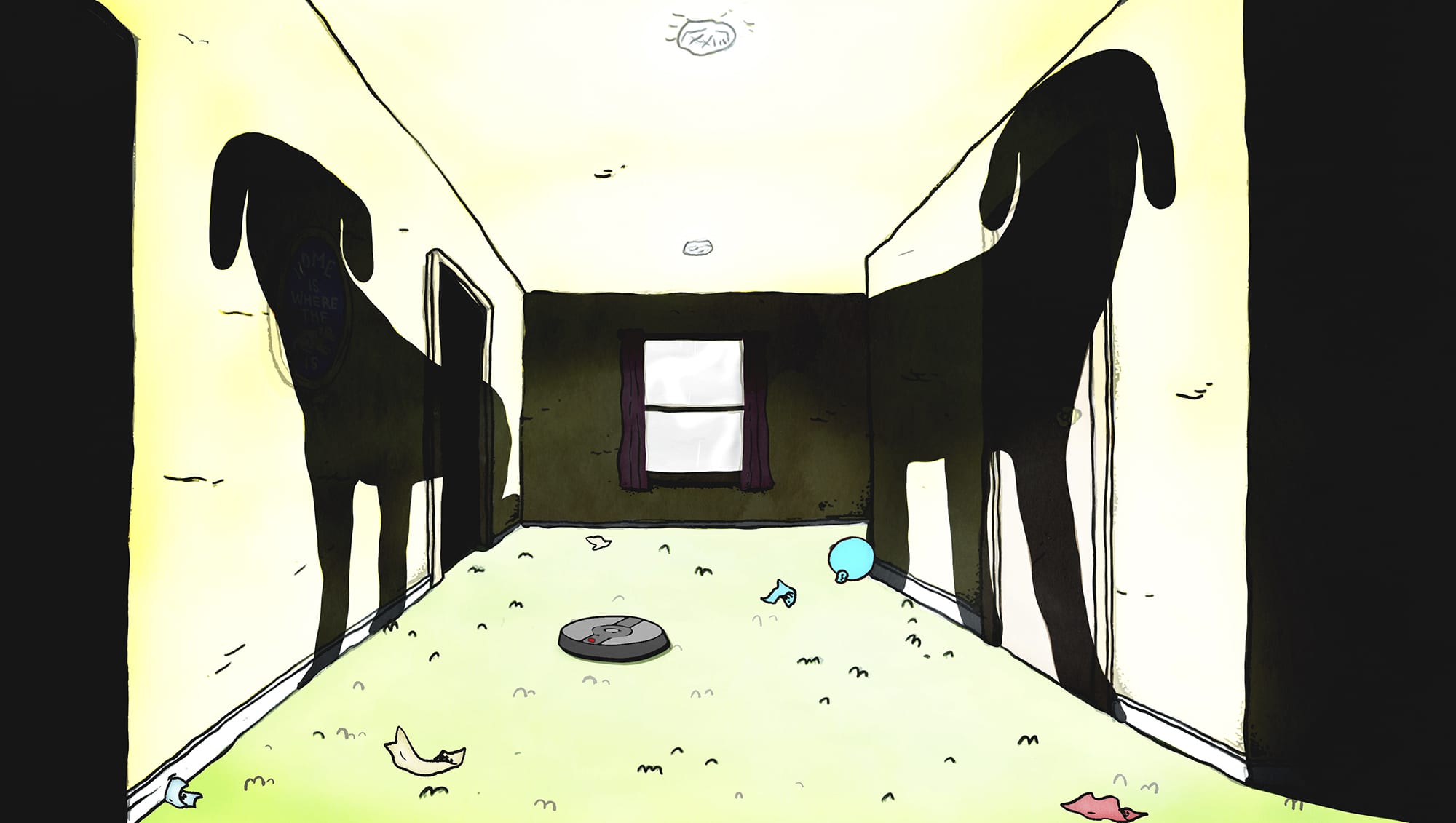