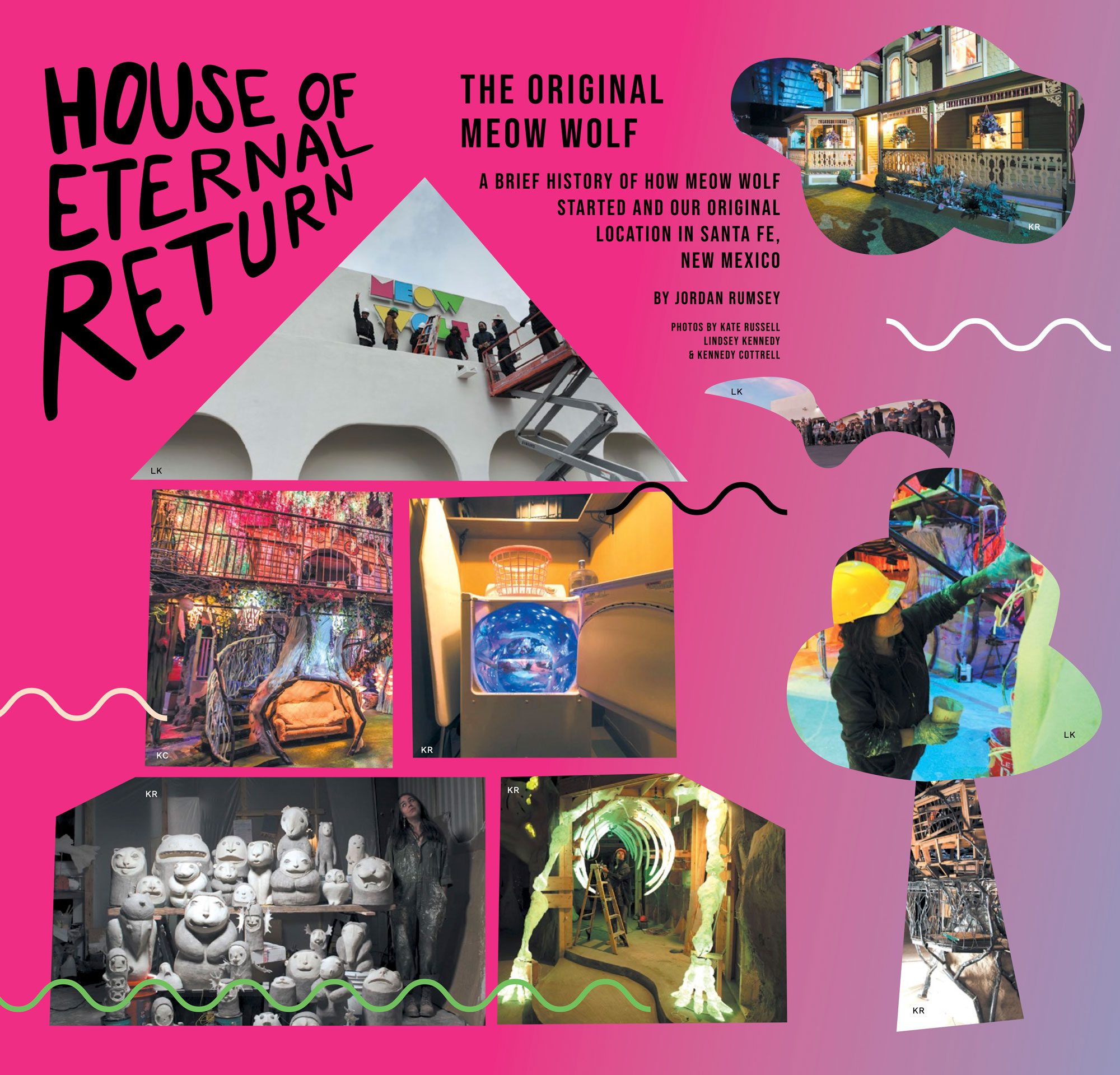 The first chapter in the Meow Wolf story started in 2008 with a collective of creatives brought together by the universe to shake up the traditional art scene of Santa Fe, New Mexico.

The group consisted of artists from various backgrounds with different talents like design, acting, engineering, writing, painting and sculpting. They made art for people like themselves, who didn’t fit in the fine arts world and didn’t want to experience art in a gallery or museum. The temporary exhibits, like The Due Return at Center for Contemporary Arts Santa Fe, grew to be so popular that a larger, permanent location became inevitable.

House of Eternal Return is a scene straight out of science fiction: an old Victorian house inhabited by a family that has been swept into another dimension through a spiraling void, inside a former bowling alley.

Walking up to the house doesn’t feel otherworldly, like a very modern multiversal transit station or light projections on a 36-foot canyon behind an alternate reality grocery store. It feels like stopping by to say hi to a neighbor who doesn’t mind if you grab a drink from the fridge.

The familiarity of the ordinary rooms and objects encourage visitors to be curious about investigating the mystery of the missing Selig family who walked on the same floors and opened the same dryer.

“TheHouse is so special, it’s got a scrappy-ness to it that makes it feel unlike any of the other locations in the best way possible. It’s full of such special important moments that only exist because we were still a small company and not ‘Meow Wolf The CorporationTM’.”— Anna Isenberg, Visitor Services Coordinator

There’s no map, no pressure, just curiosity and imagination driving the path forward through a nexus of colorful, chaotic creations. This was the approach for creating the exhibition and the same can be said for exploring the hidden passageways and tunnels that lead to more magical rooms.

The artists who worked on the House of Eternal Return didn’t have a lot of money or experience with such a massive project. They learned how to solve problems as they came up and didn’t let imperfections hold up the process of sharing their creations.

They worked with what they had and managed to get financial backing from Game of Thrones creator, George R. R. Martin, to buy the bowling alley that became the very first Meow Wolf location.

“It doesn’t look like it was made in a factory, and from the very moment the door opens to the exhibit, there’s an all-consuming feeling of being transported into something completely different, magical and important.” — Shanny Schmidt, Santa Fe Social & Community Manager

Meow Wolf was started because this particular group of artists didn’t want to fit into the fine arts world that had already been established in Santa Fe, so they found their own place and made their own rules, where no one had to question if they belong or not.

They wanted somewhere to experiment with their creativity and play around in. House of Eternal Return is supposed to feel “lived in,” so seeing a well-worn couch in a cozy tree nook is a simple reminder that things don’t have to be perfect or brand new to be appreciated.

“At the House, you can see that this is a true labor of love. It was built from nothing but found materials in our immediate environment. The House is representative of the “organic” aesthetic of Meow Wolf.” — Steven Brisk, Visitor Services Team Member

“In my opinion, there are very few cities that this would have been possible to create such a wildly unique exhibition as the House of Eternal Return, it was kind of a perfect storm of people, place and time that supported, produced and opened the portal that carried us to where we are today.” — Geoffrey Banzhof, Senior Fabricator

No two Meow Wolf exhibits or experiences are the same. Just because you have seen the House of Eternal Return doesn’t mean you’ve seen it all. Since your last visit, maybe someone uncovered a clue on a table that you didn’t see before …

Want more? Watch the Meow Wolf: Origin Story to get the full picture of where it all started or check out our Behind the Scenes playlist to get a closer look at some of the rooms inside the House of Eternal Return.

Check out Jordan’s last Birdy contribution, The Monster of Convergence Station, or head to our Explore section for more of MW’s past published works.