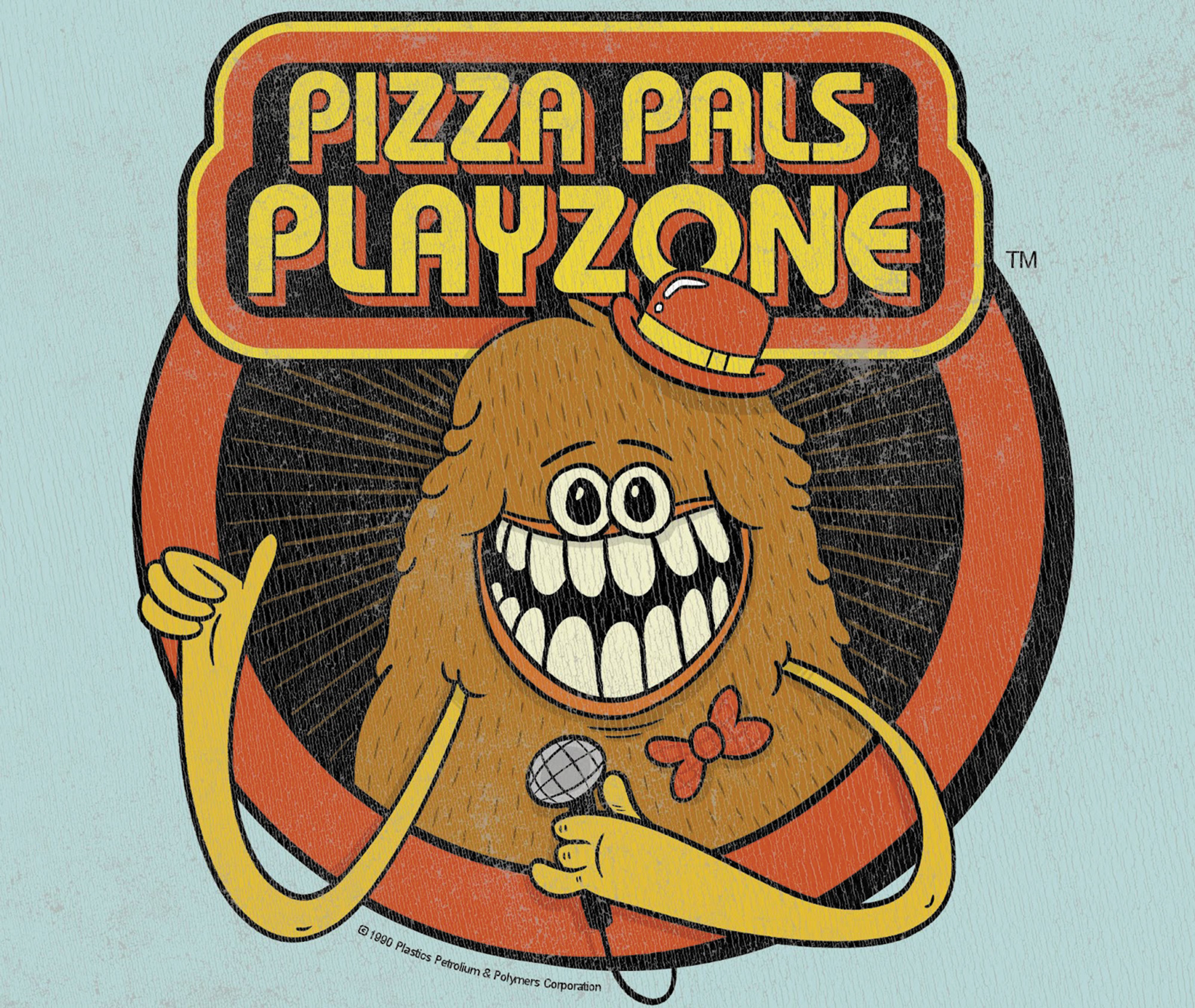 Plastic, Pizza, and Positivity with Everything Is Terrible!
By Dave Jasmon
Published Issue 096, December 2021

“How am I supposed to make a suit jacket for a breadstick?”

Anna Bihari found herself asking this absurd, yet reasonable question while working on the fabrication of Pizza Pals Playzone. A project four years in the making, this immersive installation is the latest work from Los Angeles-based video and performance collective, Everything Is Terrible!

‍If you were to ask Bihari — or her EIT! partners in crusty crafts, Nic Maier and Dimitri Simakis — about the Pizza Pals Playzone, you’d probably get an opaque answer about world famous pizza chain founder Peter ‘Pete Pop’ Poppopolis, the great gooping of 2002, and experimental cheese product, Mozzarella C_1xB!™.

‍While we at Meow Wolf can neither confirm nor deny the true story behind this melty slice of pizza-tainment (that’s for you to discover), we can indeed verify that the flagship location of Pizza Pals Playzone exists in all of its plastic-meets-pepperoni glory at Meow Wolf Denver’s Convergence Station.‍

More than a nostalgic nod to the fast food marketing movements of the 1970s-90s, Pizza Pals Playzone is an honest ode to the unbridled hubris of McDonaldland, programmed to be performed by Chuck E. Cheese-style animatronics. There’s a whole world to explore, layered with talking trees and a pizza mountain, topped with a cast of characters bearing names like ‘Salad Barb’ and ‘Hungey,’ baked with love, and served as it should be: smelling like yesterday’s pizza.

“It had to look 100 percent authentic,” says Simakis. “The idea is not about being snarky. We’re actually being very genuine and positive.”

Every detail — from era-appropriate fonts to the corporate sheen of the plastic and, yes, the precision of the suit jacket on Pizza Pal character ‘D.A. Breadsticks’ — had to be fabricated in a way that felt counterintuitive to EIT!’s well-established M.O.

Maier explains, “It was a lot of work for Anna and I, specifically, because we are the primary fabricators for Everything Is Terrible!, and everything we usually build has this charm to it that is like, ‘people made it’. This project was not meant to look that way, so it was outside of our comfort zone.”

Anna recalls, “I remember that night just being like, ‘I don’t know how suits are put together. That’s an actual thing that is very fancy and deliberate. I don’t know what I’m doing.’”

‍Founded in 2007, and built on a foundation of daily posts featuring re-edited found footage, Everything Is Terrible! has amassed a cult following over the years. The collective has made an impressive 7 feature length films, and their lauded live performances showcase a combination of ‘videos, costumes, puppets, performances, and an insane worldview.’

If these credentials aren’t enough to interest you in all-things Everything, consider this: Everything Is Terrible! has collected over 30,000 copies of Jerry Maguire on VHS, which will one day live as a permanent pyramid in the desert. So … yeah … we know … (sigh) … they had you at “re-edited found footage.”

From this baseline of EIT!’s very particular form of insanity to the controlled chaos that is a permanent Meow Wolf installation, there’s certainly a learning curve (what with the fire codes and people needing to be able to “get out”). However, these new concepts of restrictions and consistency turned out to be a benefit when it came to matching the mass-manufactured aesthetics of chain restaurants for Pizza Pals Playzone.

‍Simakis notes, “It really does smell like an air-conditioned Chuck E. Cheese. It’s very funny. It just smells like perfectly pristine … plastic. It has that new Pizza Pals Playzone smell, which is pretty amazing. I don’t know if that’s going to last, but I’m happy about it for now.”

Adds Maier, “We really enjoyed all of the restrictions that came from fire code and all of these budget things. Working on a project of this scale, a lot of things happen with so many different people working on it, and it really limited a lot of the things we could do. But we always were like, ‘Oh, that’s just how this corporation works. It’s a bunch of people making these decisions. The Pizza Pals brand has made the decision.’ I think that’s where I got a lot of inspiration, was just the inner workings of a dumb corporation. That relieved us of having to make any decisions, which I liked.”

Simakis concurs, “The restrictions definitely set us free in some ways, honestly.”

‍“I think that this has been inside of us the whole time,” Bihari says.

Both Maier and Bihari worked at McDonald’s in their youth, and this familiarity with a world where “everything is branded” played a large part in the storytelling of Pizza Pals Playzone.

Maier continues, “All of our work is obviously playing on nostalgia, and we’re always so disappointed when somebody just walks away being like, ‘Oh, nostalgia, I remember that, cool.’ But when people look at it and learn something about our current world, then we’re like, ‘Okay, I think we’re successful.’ I think that’s the tools. It’s stuff that is in everyone who goes into the room, too. Everyone has experienced shitty fast food, shitty jobs and corporations, and all of that is in us to just learn, from Pizza Pals … how to make a better world.”

‍If you do happen to visit Convergence Station and explore Pizza Pals Playzone, and for whatever reason you’re not connecting with the message, there is a fail-safe built into the installation: a phone number that just might have a real, live human on the other end.

“I’m answering phone calls,” Maier says. “If I’m here for a full shift, I could get five phone calls every day with people calling from the installation. It’s amazing…they all seem not expecting to get a real person, so they’re pretty much just like, ‘Can I order some food?’ Clearly, people are not expecting a live human to be there.”

Our advice? Come prepared with a thoughtful question, like “How am I supposed to make a suit jacket for a breadstick?”

‍The Denver flagship location of the Pizza Pals Playzone opened October 7, 2002. Unfortunately, that was the same date that the world famous founder of the pizza chain, Peter ‘Pete Pop’ Poppopolis decided to release his new, experimental cheese product, Mozzarella C_1xB!™, which resulted in the great gooping of 2002. Pete Pop was consumed in the cheese accident and the Pizza Pals Playzone corporation (and all of its beloved characters) morphed into the sentient pizza-tainment being that we see today.

Dave Jasmon is a writer and artist. Check out his work on Instagram.

Check out Dave’s November Meow Wolf Birdy install, How to Survive in the Multiverse with Oren Lomena & Skeena Rodriguez, and head to our Explore section for more of his and MW’s past published works.