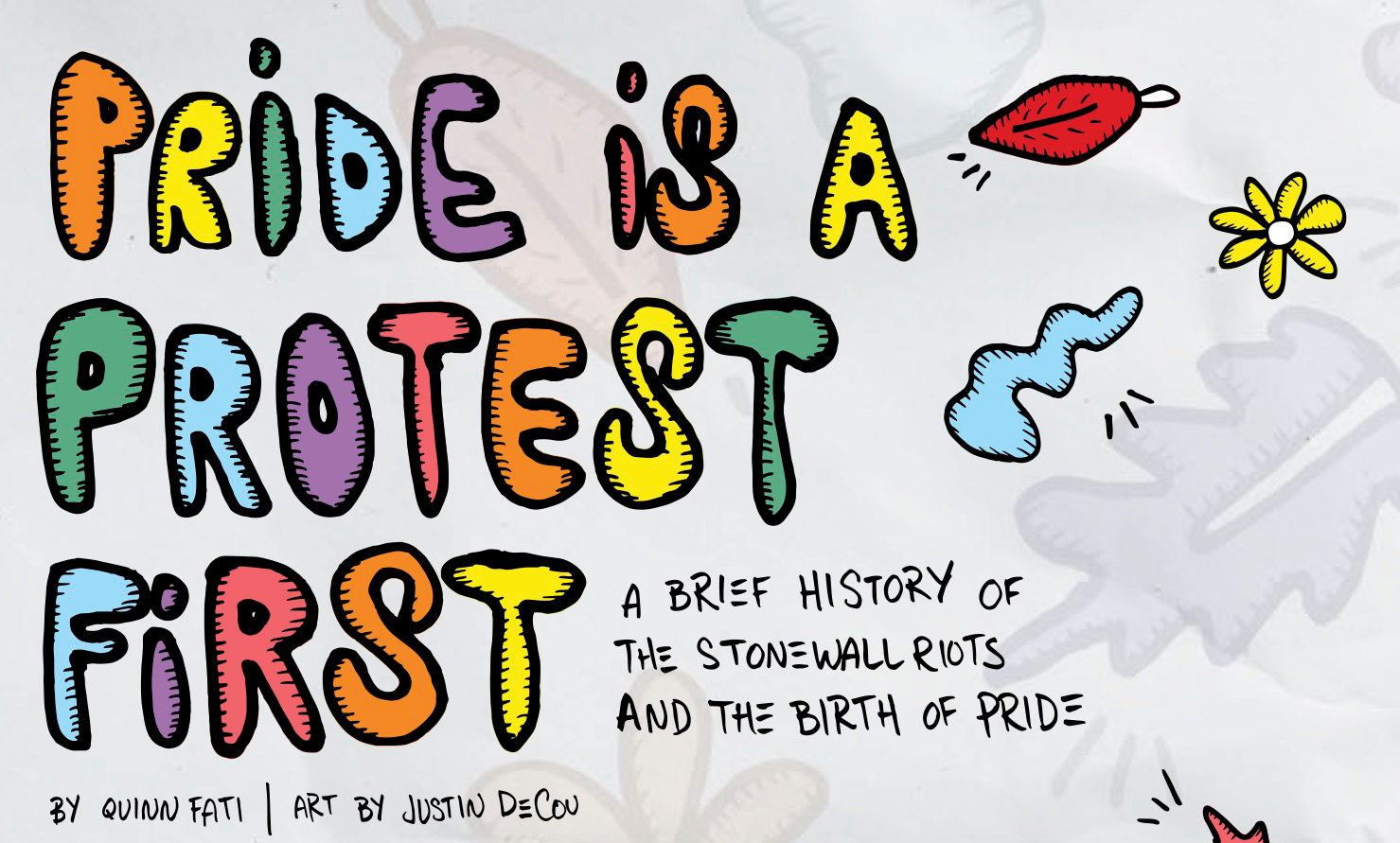 It was a humid night on June 28, 1969 at the Stonewall Inn. The majority of the clientele tended to be homeless youths. Some say that there was a gathering for Judy Garland’s recent passing though nobody knows for sure. At the time in New York, crossdressing or anything alleging to homosexual activity could be met with a wide variety of punishment ranging from a light fine to life incarcerated. That night, police raided the Stonewall Inn after running a small undercover operation to ensure that patrons were, in fact, engaging in “homosexual activity.” Cops barred the windows and doors and began to check for ID. People protested, refused to show ID, and were dragged off into a wagon. Those who had managed to evade arrest began gathering a crowd around those who were being carted off.

It is still ultimately lost to legend, however many sources including DeLaverie herself agree that Stormé DeLarverie whipped the crowd into a frenzy by shouting that her handcuffs were too tight and punching a cop. A handful of bystanders turned into over a hundred people who bombarded the police with pennies and bottles. Others slashed the tires of the officers’ cars. The riot became so ferocious that the cops barricaded themselves inside the Stonewall once other police cars and the wagon carrying those arrested had left. The gathering outside attempted to break into the club by battering the door with a parking meter, others made makeshift firebombs and threw them into the windows and doors. Eventually more cops and the Tactical Patrol Force (TPF) arrived to arrest the rioters but the group had dispersed once they heard sirens. Nobody was killed, but many LGBTQIA individuals were arrested.

Over the next few nights, groups would gather at the Stonewall Inn and protest the police presence by chanting “Gay Power!” and “We shall overcome!” As these groups would assemble, so would the police and the TPF. More people were arrested, beaten and tear gassed but that did not deter the crowd. Eventually the gatherings would turn into community organizing, with gay activists using the opportunity to build relationships in order to maintain the momentum and strengthen the presence of Greenwich Village’s LGBTQIA community.

While the nights of rioting at Stonewall was not an isolated incident (Los Angeles had seen a riot at Cooper Do-nuts, as well as San Francisco at Compton’s Cafeteria), it would gain the trajectory necessary to launch LGBTQIA activism as we know it today. Pulling inspiration from the Black Power movement, gay activists would form more radical groups such as the Gay Activists Alliance (GAA) and the Gay Liberation Force (GLF). A year after the Stonewall riots, an antiwar bisexual feminist activist named Brenda Howard would gather representatives from the GAA, the GLF, and the homophile organization Mattachine Society, to come together and create what was then called the Christopher Street Liberation Day March. Representative L. Craig Schoonmaker suggested that the word “Pride” be used in reference to the march, stating that there should be pride taken in being LGBTQIA in a society that deemed it morally shameful. The march took place on June 28, 1970 with participants walking 51 blocks from Christopher Street to Central Park. At first, people were tentative walking the distance, but as they walked, more people gathered in solidarity until the march became 30 blocks long.

Another entity that emerged from the Stonewall riots that is less discussed but just as important is STAR. STAR stands for Street Transvestite Action Revolutionaries, and was the first transgender homeless shelter in recorded history. Founded by Sylvia Rivera and Marsha “Pay it no mind” Johnson, both women struggled with homelessness and sought a solution not only for themselves but for their community. Originally STAR was a trailer in an empty parking lot in Greenwich Village, where homeless people, particularly homeless youth, could gather to sleep. However, the trailer was towed with up to 20 youths inside (fortunately most of the kids leapt from the trailer as it was being towed and nobody was harmed). Johnson and Rivera hustled the streets to develop a better solution: buying a building for STAR to set up shop and to avoid the Mafia-controlled bars (which did include the Stonewall Inn). Rivera explained, “We fed people and clothed people. We kept the building going. We went out and hustled the streets. We paid the rent. We didn’t want the kids out in the streets hustling. They would go out and rip off food. There was always food in the house and everyone had fun. Later we had a chapter in New York, one in Chicago, one in California and England. It lasted for two or three years.” Perhaps most famously, Rivera took the stage at the third year of Pride to castigate the crowd for losing sight of the most important aspects of community life and caring for one another, as she and Johnson among others kept STAR going.

The impact of the Stonewall riots clearly echoed throughout the years, with Pride now being a huge celebration in nearly every major city in the United States and beyond. Even as a celebration, as a party, Pride still exists as a protest movement as it solidifies and venerates what it means to be LGBTQIA. What becomes troublesome is corporate presence – companies that commercialize what Pride is. Now you can find Prides that are sponsored by such entities as Google or Wells Fargo, which both have a history of homophobic transgressions. Target sells clothing items geared towards those who celebrate Pride or are LGBTQIA, but only during the month of June, and then it is immediately marked as clearance items once Pride month is over. The issue of commercialized Pride becomes a question of appreciation versus appropriation for the sake of capital.

What’s important to remember about Pride is that it started as a series of riots, that Pride came from the actions of the marginalized and abused. That Black and brown LGBTQIA homeless and working class people were at the forefront of this movement, and those are the people who need to be celebrated as we celebrate ourselves. At this time, I cannot encourage you all enough to donate to the fundraising efforts of Black and brown trans people in your community as they are the most disproportionately affected by homelessness and poverty. Miss Major Griffin-Gracy, a trans rights activist who was incarcerated for being one of the leaders during the Stonewall riots, is currently taking donations for her retirement fund which can be found at fundly.com/missmajor. The importance of Pride is not the party, it’s the presence of community. We as LGBTQIA people need to support and love one another, especially in this new wake of political onslaught of vitriol towards us. We must stand together, united and loving of one another, to face and fight these familiar political realities, to defeat this evil, and to create a future full of hope and adoration for the LGBTQIA generations to come.

What is Pride Month and the History of Pride? by Matt Baum

Stonewall: The Riots That Sparked The Gay Revolution by David Carter

When Brooklyn Was Queer by Hugh Ryan

Quinn Fati is an artist and writer. Check out more of their work on Instagram.

Justin DeCou is a self-taught Denver-based artist who goes by JUHB. He loves to paint big using bright, busy, chaotic shapes and body parts that all mesh into a cool pattern, as well as massive, simple, doodle-like characters. Justin typically uses acrylic and house paint and whatever else is lying around his apartment. See more on Justin’s Instagram.

Check out Quinn Fati’s May Meow Wolf Birdy install featuring a Q & A with psychedelic artist Burt Vera Cruz, or head to our Explore section for more of their work.