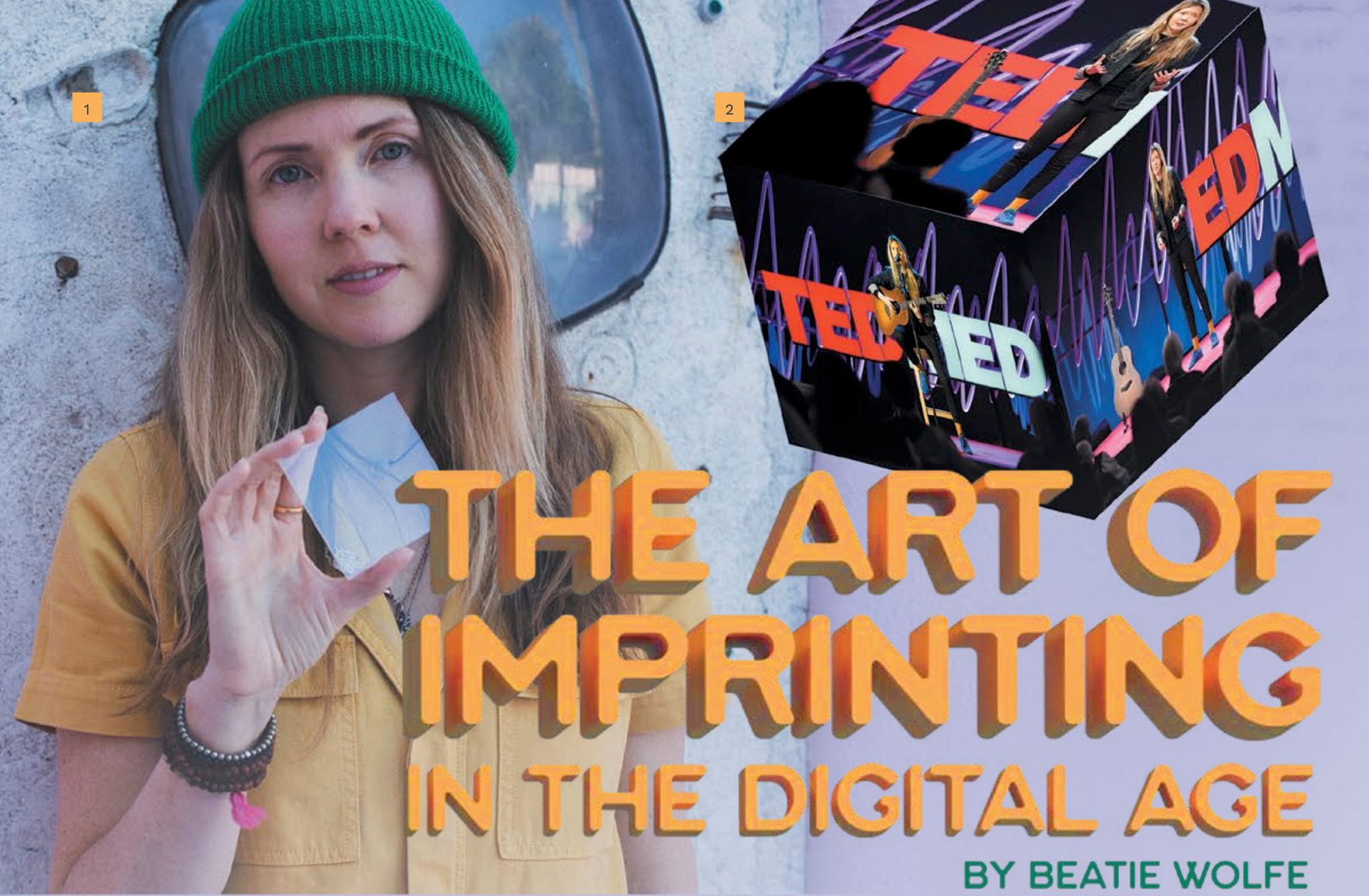 I’ve always loved the stories of albums, the tangibility of records and the ceremony of listening. From the time I started writing songs (age 7) and discovered my parents’ vinyl collection, I saw records as musical books, with the artwork providing the perfect backdrop for the music, and I loved opening them up and entering into the world of the album. There was also a ritual to the occasion. From that age I started imagining what my album could look like, what it could feel like, what worlds I could create. When it was time for my first album to be released, it was a very different era with the digital replacing the physical. So I thought about how to connect the two and that’s what my work became centered around. Reimagining the vinyl experience but for today.

Art Is Core To Our Humanity

Why was this so important to me? Because music is core to our humanity. We are a musical species more than anything else and music imprints on the brain deeper than any other human experience.

I believe that there are three things that allow something to go deep, to stay with us and forever change us. These are: tangibility, storytelling and ceremony.

Tangibility as in a physical art form or space to explore. This could be a record jacket or the world’s quietest room. Anything that grounds us in our present reality through a physical touchpoint.

Storytelling in the broadest sense of the word. The ability for the artist or creator to tell a story through their work that can engage the imagination and transport us.

And lastly but perhaps most importantly, Ceremony, the space around and within the experience that allows us to go deep, to be fully immersed.

I believe that these three things set the stage for the music and allow it to imprint. Imprint so that every one of these experiences becomes a part of who we are and what we carry with us. This doesn’t just apply to music, but applies to everything and anything that helps to reconnect us with ourselves and one another. It’s these experiences that keep us alive inside.

What Threatens These Values Today?

Tangibility, storytelling and ceremony had always been part of the physical music listening experience and were just some of the things we lost when we moved to digital.

The digital era created access, it presented solutions, but it also created the idea that we could fast-track a lot of what it means to be a human being on this planet and without the true cost or value reflected in the process.

Music now floats around in its intangible sphere along with everything else that sits there: news notifications, calendar alerts, social media. Everything occupies this same superficial stream of information that infiltrates our day-to-day lives, bombarding our sensory systems until we are numb, overloaded and fatigued. Music, and art, have become part of that constant background chatter and we have forgotten why they are so much more.

There is a fine balance between what needs to be innovated and what needs to be preserved. So how do we reconcile the value of music and art today with an industry that has decided that albums are obsolete and singles need not be more than jingles; forgotten as easily as they are created? The opposite of imprinting.

I found part of my answer in neurology. The great late Oliver Sacks studied the power of music extensively and grounded what a lot of us feel intuitively about music, in science. In Musicophilia, his book about music and the brain, Sacks documented the impact of music for almost every neurological condition from Parkinson’s to Alzheimer’s, autism to schizophrenia, showing how music is a remedy, a tonic, an orange juice for the ear.

And I realised that there was no greater application of music than this: using music to reconnect us with ourselves and one another when nothing else could.

A seed was planted in the back of my mind and when I found out that my grandmother had been diagnosed with dementia I decided to take my guitar with me the next time I visited her and play her some songs … because why not?

Orange Juice For The Ears

Watching my grandmother transform from agitated and confused to joyful and at ease with just a song moved me so deeply. Then I decided to play to my father-in-law at his care home in Portugal and when the home director asked if I would play for everyone in the dementia ward, of course I agreed. Realising that my songs would be unfamiliar to the residents and that no one in the home spoke any English (except for my one relative) I was expecting a nice ambience at best. However as I played and saw people waking up, clapping along, even dancing in their chairs and becoming visibly reanimated from the music, just as Sacks had described, I realised that something much more important was happening.

And then the director informed me in the 10 years he had been there it was the best he had seen the group.

Something was crystalizing into view. What if music’s power was so strong, so interlinked with our own sense of self and wellbeing, that with even the memory component removed it could be a tonic, a remedy, a “way in.” What if it was the music and not the memory making the magic? In Musicophilia, Sacks had theorised that “music does not have to be familiar to exert its emotional pull” but he had not tested this. I had seen the tip of precisely this and wanted to see how much deeper it went.

Inspired by this insight, back in the UK I began the Power of Music and Dementia research project with The Utley Foundation in 2014 with the intention of recreating what had happened naturally in Portugal but this time with the right controls in place and the caregivers and doctors monitoring the residents. I went into care homes all across the UK and performed an original set of my songs while the residents were monitored both during the live performance and in the weeks following as they listened to the same songs on headsets.

The results were amazing. Both memory and communication were improved during the duration of the project and I witnessed some of the most profound reactions to music I have ever seen. Reactions that imprinted on me forever.

I watched David transform from a catatonic-like state to dancing. And Anne, who had not spoken a word in seven months, burst into song halfway through the performance. Every one of these breakthroughs felt like the most vital link in the chain of our understanding about what moves us, what restores us, what makes us uniquely human.

What began as a small research study in the UK was suddenly getting global attention and I found myself sitting with the world’s top neurologists and researchers as they picked my brain on the subject. And all because I asked a question; not as a doctor, but as an artist.

Today music for dementia is becoming a global movement. The charity, MusicForDementia, (established out of my project) is now actively working to get music in all care homes in the UK and I continue to work with them as an ambassador.

So what did this teach me? It taught me to celebrate the experiences that keep us alive inside, that remind us of why we are here in the first place. At a time of more access than ever, how can we retain a sense of value? How can we choose to carve out deeper, more ceremonial moments in amongst the noise? How can we protect those endangered experiences that become our touchpoints, that shape our emotional sensibility, our identity, our wellbeing and create vast canyons and reserves in our very being?

When you have witnessed the power of music as medicine in this pure and concentrated way, which cannot be staged or fabricated. It either works or it doesn’t. When you see what music can do, when even language and memory are removed from the folds; see how the first few notes evokes a smile, a hand twitch, instantly, effortlessly, and this builds and grows. No tangible memories, no time and place. Just them and the music. And suddenly the brain opens up like a flower, gently unfurling, presenting new pathways you never believed were there …

“Musical weirdo and visionary” (Vice) Beatie Wolfe is an artist who has beamed her music into space, been appointed a UN Women role model for innovation, and held an acclaimed solo exhibition of her ‘world first’ album designs at the Victoria & Albert Museum. Wolfe’s latest innovation, From Green to Red, is an environmental protest piece built using 800,000 years of climate data to visualise rising CO2 levels which was unveiled at the Nobel Prize Summit, London Design Biennale and the UN Global Climate Conference COP26. Wolfe is the 2022 Guest Curator for Supernova 7th Dimension Film Festival’s Silent Screen Outdoor LED Exhibition: Activating Environmental Awareness, where she will also project From Green to Red on the Daniels & Fisher Clock Tower on September 17th. Learn more about this free public event: denverdigerati.org

Head to our Explore section to see countless interviews, art pieces and installs in Birdy by Beatie Wolfe.