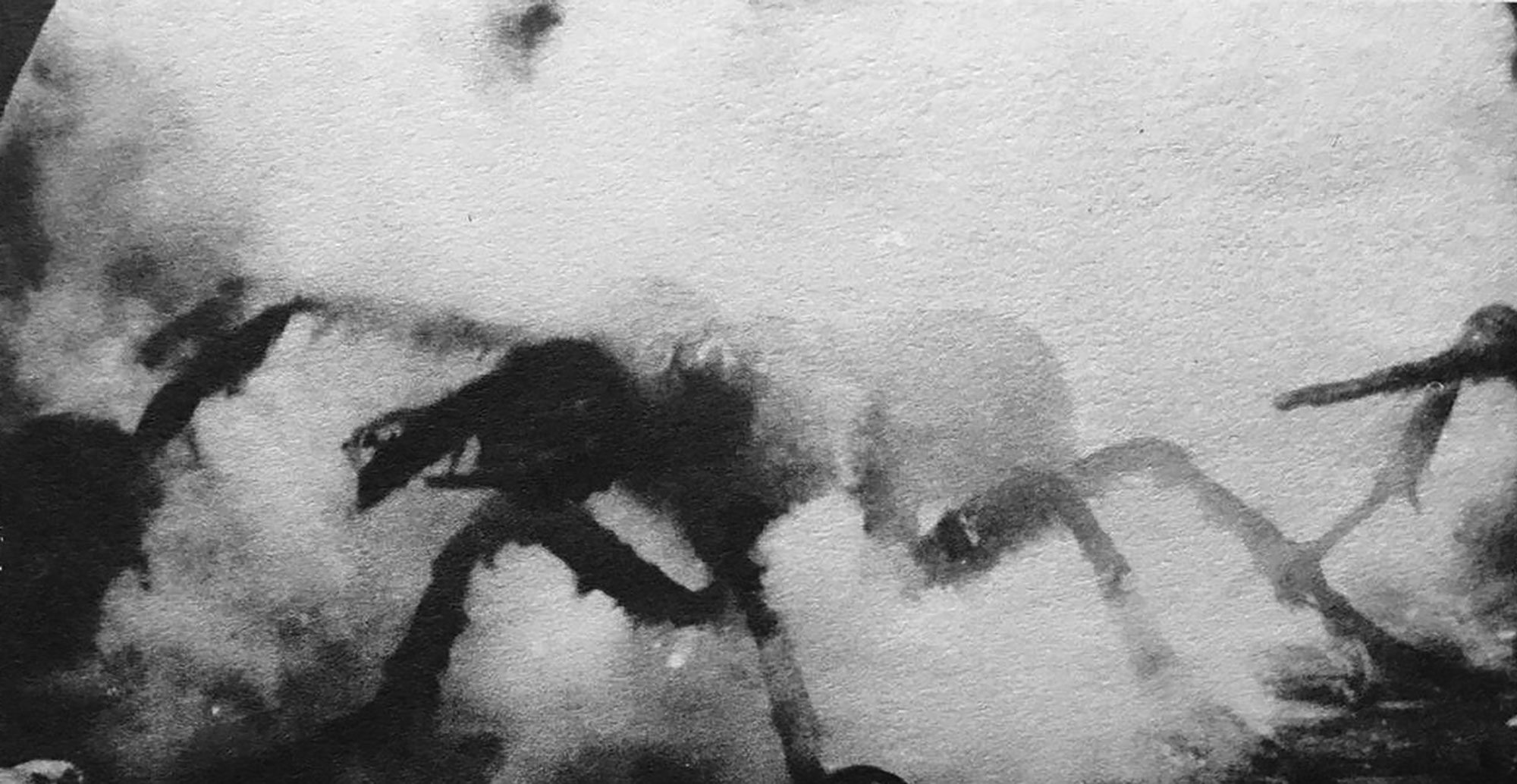 The Balance of Nature
By Herscho Duds
Published Issue 106, October 2022

Throughout my career as an evolutionary biologist, as of late in Berkeley, I have been part of numerous research projects in remote areas around the world. On this dreary Halloween Eve, as I am sitting down to begin writing my memoirs, one of the bug-costumed kids who came to our door made me commiserate about a particular eerie study early in my life. This event shaped my academic career, but is now making a career of haunting me.

After completing my Ph.D. at Harvard, a distinguished Stanford professor hired me as a so-called postdoc. As part of my position, I worked for a few months in the eastern region of Gabon near the Oua River on a research project involving a type of jungle army ant. This particularly rare species beautifully illustrates the power in numbers. For instance, in a matter of hours the minuscule ants can devour a whole wounded-immobilized or dead aardvark: flesh, cartilage, bones, teeth, hairs and whatever else. Their social structure is complex, not only having the normal division of labor, but three specialized soldier/forager classes co-exist. One has unusually large and strong pinchers, another has the ability to excrete a horrendously potent formic acid-based concoction, and the third has massive legs for the ability to carry about forty times its own weight (twice as what is normally seen) for considerable distances. The precise coordination by these troops results in the rapid chemically-accelerated disintegration of the victim into tiny chunks that are quickly carried off to their nearby underground nest. In the end, truly nothing remains at the site of the micro-dissection.

While witnessing these bacchanals, I started focusing on activities that occurred upon completion of their meal when the ants left behind a wiping pattern in the dust or undergrowth where the dead(ed) victim had lain. Along with the quickly dissipating volatile formic acid mix  that leaves no lingering vinegary smell, I deducted that these represented attempts at unmarking or camouflaging the site to prevent possible tracking by predators like anteaters to the location of the colony’s residence. Yet, most remarkable was the intricate mystical and alien-looking webbed design on the surface of the area, that despite being undecipherable, appeared so natural that it would not be noticed by a non-expert. In fact, I had literally stumbled on my first one when tripping over a trunk and falling into it headfirst. The resulting close-up view revealed the ant’s handy artwork. In scientific lingo, such an accidental finding is called “serendipity” to elevate its credibility.

Having acquired all these interesting facts and ideas in a couple of months, I was quite pleased and set out for my journey back home. At the end of my first day traveling by foot I arrived at a hospitable village. A big celebration was taking place as one of the women had hunted down and slain a super venomous, black mamba-like snake that had killed a number of townspeople over the past several months. The woman had slaughtered the monster by cleanly chopping off its head with a machete and the trophy was displayed on a large banana leaf near the outskirts of town. Its body was arranged distinctly separated from the head as evidence and an ominous sign at the entrance of the settlement in order to convey the message: “fear these powerful villagers.” Meanwhile the whole town had gathered at its central square on this momentous occasion for an extensive celebration with drink, food and dance.

Gone unwitnessed, the body of said snake on the banana leaf was now covered by a plethora of ants of the type that — if I had been there instead of drinking palm wine at the party — would have been so familiar to me. I would have also known the ants would not eat the snake, as that must have been a bad past experience. In that moment a boy walked away from the crowd in search of his mother’s hunting trove. Locating the treasure, he saw the ant-covered snake body, but oddly the adjacent head was untouched. He gripped the snakehead with the intent to pierce it onto a stick and then parade among the festival crowd to honor his brave mother. Equipped with primitive-autonomous neural and muscle controls, the head of the snake struck with its remaining intrinsic truculence and emptied the poison from its jaw-sacks into the boy’s abductor pollicis between the index finger and thumb of his right hand. He was instantly overpowered by an unimaginable fear and before being able to recover from that initial shock, he fainted. Upon waking ten minutes later the neurotoxin had taken control and he noticed his complete paralysis. He instinctively opened his mouth to scream but nothing came out.

The ants that were still agonizing over the snake’s body noticed the nearby commotion and expanded their foraging territory to the subsequent newly identified, and possibly consumable, target. With full mental clarity the paralyzed boy saw the vast number of ferocious ants approaching, accompanied by the stench of the noxious ant acid. Once more massive fear gripped him by the throat and in utter terror he scanned for any sign of his elsewhere dancing mother. Hot tears burst from his eyes when he was overcome by the excruciating pain inflicted simultaneously by thousands of nasty pinchers. Omitting sickening details, the boy died a most tormenting, prolonged death and was disassembled bit-by-tiny-bit, including shorts, shirt, and all, while the village continued its celebratory activities.

The next morning there was a terrible commotion in the community. The parents of the boy were wailing that they could not find their son anywhere. An extensive search was conducted but to no avail, there was no trace of him to be found. Hereupon the citizenry proclaimed that the boy must have been kidnapped by their rival tribe. Great anger erupted. Amongst the increasing calls for revenge, I decided it best to walk away from the village and grabbed my belongings to make my way out. While scurrying out of town I noticed the banana leaf on the side of the road with the beheaded snake body on top. Closer inspection revealed that the snake’s head was located near a pointy stick in an adjacent spot surrounded by almost invisible webbings that my trained eyes immediately recognized as my earlier discovered camouflage motif. It was instantly obvious to me as to what had transpired. Therefore, I stood there somewhat indecisive, but in the end did not turn around, and as such gave life back to the boy, allowing the notion of his kidnapping the prior night to endure.

Upon my return home I quickly wrote up my findings on the mystical colony-programmed-camouflage (formiflage) and my manuscript was rapidly accepted and published by the prestigious journal Nature, followed by awards and prizes. But now, at my advanced age, I regret to also note something I have neglected to mention over all those years. While I was basking in glory, far away a deadly fierce tribal war was raging.

Herscho Duds is a pen name for a university professor in biological sciences who has revitalized his interest and activity in creative writing. He publishes in AllPoetry, and also in the Dutch language in newspaper print and online forums in The Netherlands.

Check out Herscho’s last spooky story in Birdy, It Was A Sunlit Fearless Day, published in Issue 094, October 2021.