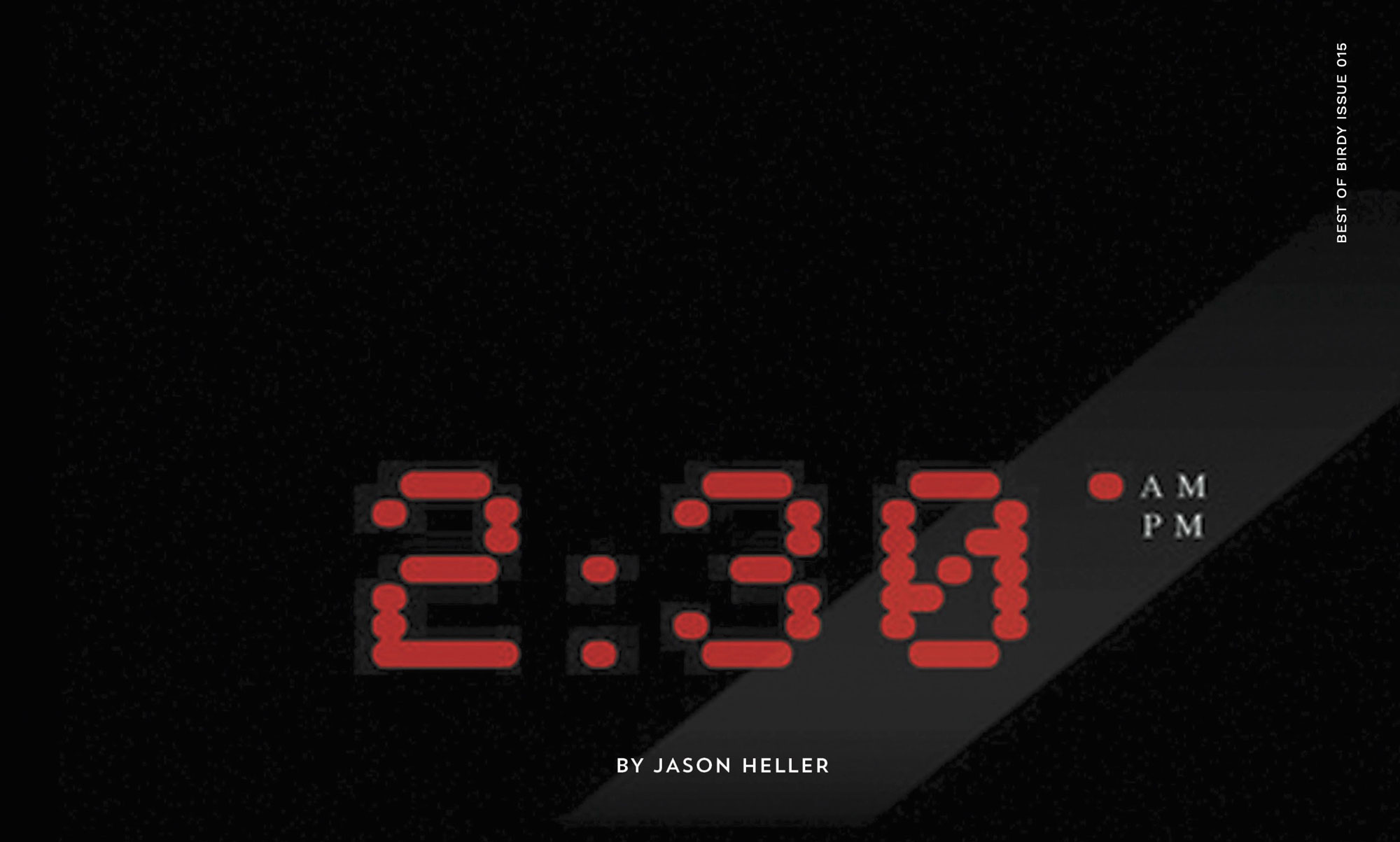 The knock at the door comes at 2:30 a.m.
I am alone and awake to greet it.
I pad down the hall in soft socks and weak shadows, my shoulder blades
twisting beneath my skin like insects trapped in a napkin.
Charlie says it’s a kind of ritual. Charlie doesn’t know shit. Charlie has the
teeth of a horse.
Somewhere a car starts. Outside, maybe.
I turn before I reach the door and scratch the knob with one fingernail, two
fingernails, three fingernails.
What’s on TV? Better to know before you turn it on. Never turn it on before
you know.
I reach the living room and turn it on anyway, reckless in that room for living.
Light tilts and pours out.
Before long it’s empty.
My eyes open and close like machines.
– – –
The knock at the door comes at 2:30 a.m.
My skin is awake before I am, migrating across the meat of me. Has Charlie
ever had to feel this? Does he know where the light goes when the bulbs
break and the sky sags?
No, probably. Charlie has a flood in his skull.
I wonder where he is now, even as the knock echoes. It sounds sad this
time, a sigh of knuckles on pine.
It doesn’t get any easier. To keep him out. To keep sleep up. To keep skin
still.
I wonder what a kiss would feel like on that skin. Lips are bumpy and purple.
I saw it on TV once, a disease.
Has the knock gone away? I wait to find out. The distance between each
thud grows until the cracks begin to show.
In the cracks are insects, aching.

Jason Heller is the author of STRANGE STARS, a book about science fiction’s influence on ’70s music (David Bowie, P-Funk, Hawkwind, Rush, Kraftwerk, Devo, and everything in between). It was published in hardcover and paperback by Melville House Publishing and is available everywhere books are sold. Jason is also the author of the alternate history novel TAFT 2012 (Quirk), the Goosebumps book SLAPPY’S REVENGE (Scholastic), the Pirates of the Caribbean book THE CAPTAIN JACK SPARROW HANDBOOK (Quirk), and numerous short stories in magazines and anthologies. He’s the former nonfiction editor of CLARKESWORLD and won a Hugo Award in 2013 as part of that editing team, and he also penned a chapter of Ann and Jeff VanderMeer’s THE TIME TRAVELER’S ALMANAC (Tor). He’s written about pop culture for THE NEW YORKER, THE ATLANTIC, ROLLING STONE, PITCHFORK, NPR, ENTERTAINMENT WEEKLY, THE A.V. CLUB, and many others. His next two books will be published in 2021: REPEATER, an urban fantasy novel set in the ’90s punk scene (Saga Press) and EXTRATERRESTRIAL SUMMER, a memoir about being a sci-fi-obsessed kid growing up in poverty in the ’80s (Melville House). His most recent band was the post-punk outfit WEATHERED STATUES (Svart Records), and he lives in Denver with his wife. He is represented by Eddie Schneider, Vice President of JABberwocky Literary Agency.

Check out Jason Heller’s last Birdy install, Why Are We Whispering?, or head to our Explore section to see more work from these talented artists.