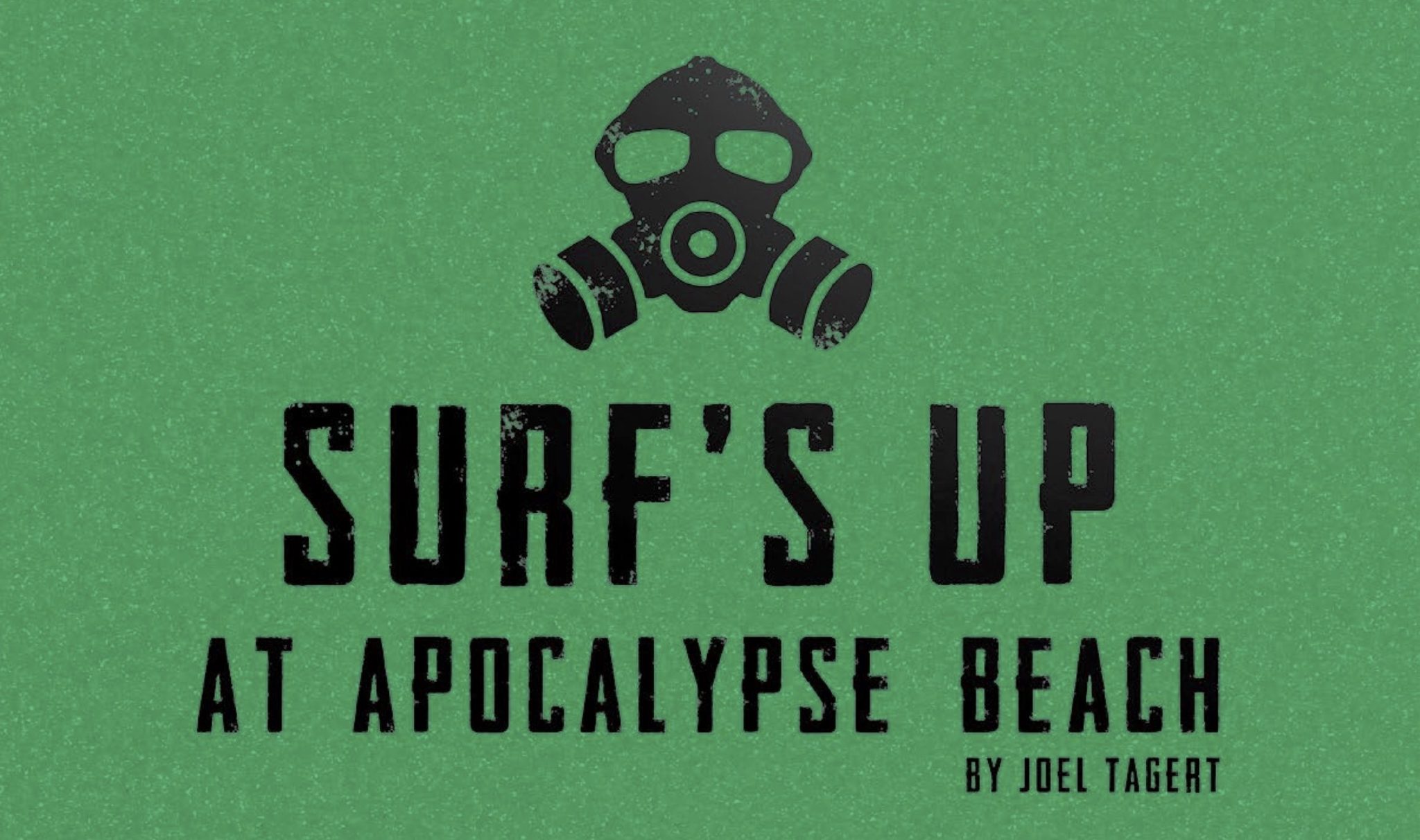 It’s the hottest day ever in LA, which is whack because it’s not even sunny out. Sky’s gray as a suit and the air smells like a trash fire. I take one look and say, “Foo, you got to get to the ocean,” and Jay Bee agrees. So it’s wetsuits in the bag, boards in the van, the music swells, and …

Turntable scratch. Traffic’s frozen like an ice cube. Or come to think of it, more like a lava tube. While we’re sitting there we smoke a joint. “Probably cool off if it’d just rain,” Jay says.

“I know, right? It’s like the whole city needs to pee, but you’re in your car and can’t get out.”

“You’re quite handy with the metaphors.”

“Thanks, dude. I’m like a dumpster that’s always got fresh stuff in it.”

Something wet slaps onto the windshield. “Shit,” I cough, since I got a hit in me, then cough a lot more, til I wonder if I’m hallucinating.

It looks like a frog. A freaky, slimy, gray-green frog the size of a mandarin orange, except it must be some kind of mutant cause it’s got a membrane between its arms and legs, like a flying squirrel. It’s not even dead. It hops away.

Then another hits the windshield. And another. It’s raining frogs.

The rain only lasts a minute or so, and then we’re just sitting there. Jay Bee opens his door, this faraway look in his eyes, and gets out. A lot of other people on the highway are doing the same. He squats down to get a better look at one of these freaky frog fuckers, “Man, I don’t think this is an ordinary— ”

That frog hops up — a way bigger hop than you’d expect — and slaps him in the face. He screams as he pulls it off and squishes it between his fingers until nasty green ooze runs over them. He doesn’t look too hurt, but he’s got two little bite marks on his cheek. “You okay, man?”

His face starts bubbling. It’s like chewing gum. I sit waaay back in my seat, pressing against the door. He’s making terrible noises. “Don’t worry, bro,” I say. I would get in the driver’s seat, but it’s bumper-to-bumper and there’s nowhere to drive. I do reach back for my bag and my skateboard though. “You’re gonna be okay!” He shakes his head, then looks at me and opens his mouth wide, like freaky wide. “Bro?”

Tentacles whip out of his mouth. They’re thin and translucent and coming right at me. I open the door and hit the pavement running.

I know there’s more frogs out there, and sure enough one of the evil fuckers take a jump at me. I whack it with my board and it’s a home run for Team Foo. Then I throw down my board and pump for all I’m worth. Fortunately it’s all downhill right now, though I do keep having to jump or swerve to avoid the little fuckers. There are also a lot of drivers who had the same idea as Jay, got frogged, and now they’re smashing windows and grabbing people.

Funny thing too: the frogs are starting to dissolve. Like, their bodies are getting really soft and there’s this nasty smoke coming off em.

Fortunately, before I ever hit the uphill slope, I find a green Ninja motorbike just sitting there with the keys in it. Guessing the owner got frogged. I hop on and it runs like a dream. Finally, some forward progress! I tuck my skateboard into my bag and I’m off like Easy Rider.

I go a quarter mile when I see this chick running for her life, more or less, so I ask her if she wants a ride. She squints at me. “You’re not a creeper, are you?”

“Just a righteous dude trying to catch a wave, I swear.”

“Pretty much just trying to stay alive! You?”

“I was thinking up north.”

Actually though, we’re just hitting Boyle Heights when the earthquake happens. I’m doing a pretty decent job of keeping the bike upright when I see the highway in front of us start to crumble.

Now, in life you got two choices when confronted with obstacles: hang your head and cry, or rev that shit and fly! “Hang on!”

We crunch pretty hard on the far side, but we’re alive and kicking, and it seems like we’re finally away from the froggers. Too bad the bike’s got a flat, and that LA now has a giant smoking chasm running west-northwest across downtown, meaning I-5 is pretty much out. “I don’t know if I’m gonna make it up to Mavericks today,” I observe sadly, but then I cheer up. “Shit, let’s go to Venice.”

“Or we could hide and fight for our lives,” Kate says.

“Fair point. But your bike’s busted.”

“You sure you’re not a creeper?”

“It’s that or walk. Don’t worry, it’s just til we get down off the highway. But we might want to hurry, looks like there’s something going on back in the Grand Canyon there.” That being a hundred-foot tall spider-looking thing climbing out of the dust and smoke.

You can’t piggyback on a skateboard without having at least a little bit of fun, and after that we hit it off. Turns out Kate’s this rad artist who makes chandeliers out of bike chains and other parts. We get some tamales from a cart (because spider monster or no, you got to eat) and walk most the rest of the way to the beach. We’re so into talking we barely notice the swarm of locusts, the psychic snakes or the puppet master robots. Funny how things just work out sometimes.

Once we get there, I’m fucking amazed. First of all, the goobers have all cleared out and the ocean’s nearly deserted. Fuck yeah! Second, the waves are next level, macking sets like I’ve never seen. Third, the rental place is abandoned, so I don’t even have to call in any favors!

“I’m just gonna chill here and watch,” Kate says. “I think the waves are a little too big for me.”

“Yeah, could be sketchballs. See you in a few!”

I head out and the water’s fucking perfect. Feel like I’m born again just jumping in. I wonder what’s causing the waves, but I figure it’s probably something to do with the earthquake. Maybe the military agrees, cause while I’m heading out I hear some fighter jets flying overhead.

Finally I see it: the master wave, the one I’ve been waiting for. This is my moment. Before it hits I see there’s something behind it, some crazy crab monster tall as a skyscraper wading toward shore, but I don’t have time to worry about that. I catch the wave just right, and it lifts me up so I’m flying, right in the pocket, and as the jets fire their missiles at Crab Thing behind me, it sounds like fireworks celebrating

Joel Tagert is a fiction writer and artist, the author of INFERENCE, and a longtime Zen practitioner living in Denver, Colorado. He is also currently the office manager for the Zen Center of Denver and the editorial proofreader for Westword.

Caitlyn Grabenstein, a.k.a. Cult Class, is a collage artist, sketch artist, and designer out of Philadelphia, Pennsylvania. She started doing art at a very young age and has pursued it in different forms throughout her life. While working in the music industry and running her own charitable business, BANDADE, she began creating websites, ultimately hosting more than 50 charitable shows with over 60 different artists including Imagine Dragons, Jason Isbell, Maren Morris, Ingrid Michaelson, the Goo Goo Dolls, Alabama Shakes, Florence Welch and more. During this time, Caitlyn started collaging out of necessity to create concert posters. She fell in love with the process and began collaging regularly. Caitlyn now runs her own design business, CLG Design Co.. Her work can be found in buildings around Philadelphia. Caitlyn’s pieces have been commissioned by individuals, musicians, businesses, and real estate companies from Chile to Germany to Los Angeles. Check out more of her art on Instagram.

Check out Joel’s July Birdy install, The Eagle Hunger, and Caitlyn’s, Boundless, or head to our Explore section to see more from these creatives.