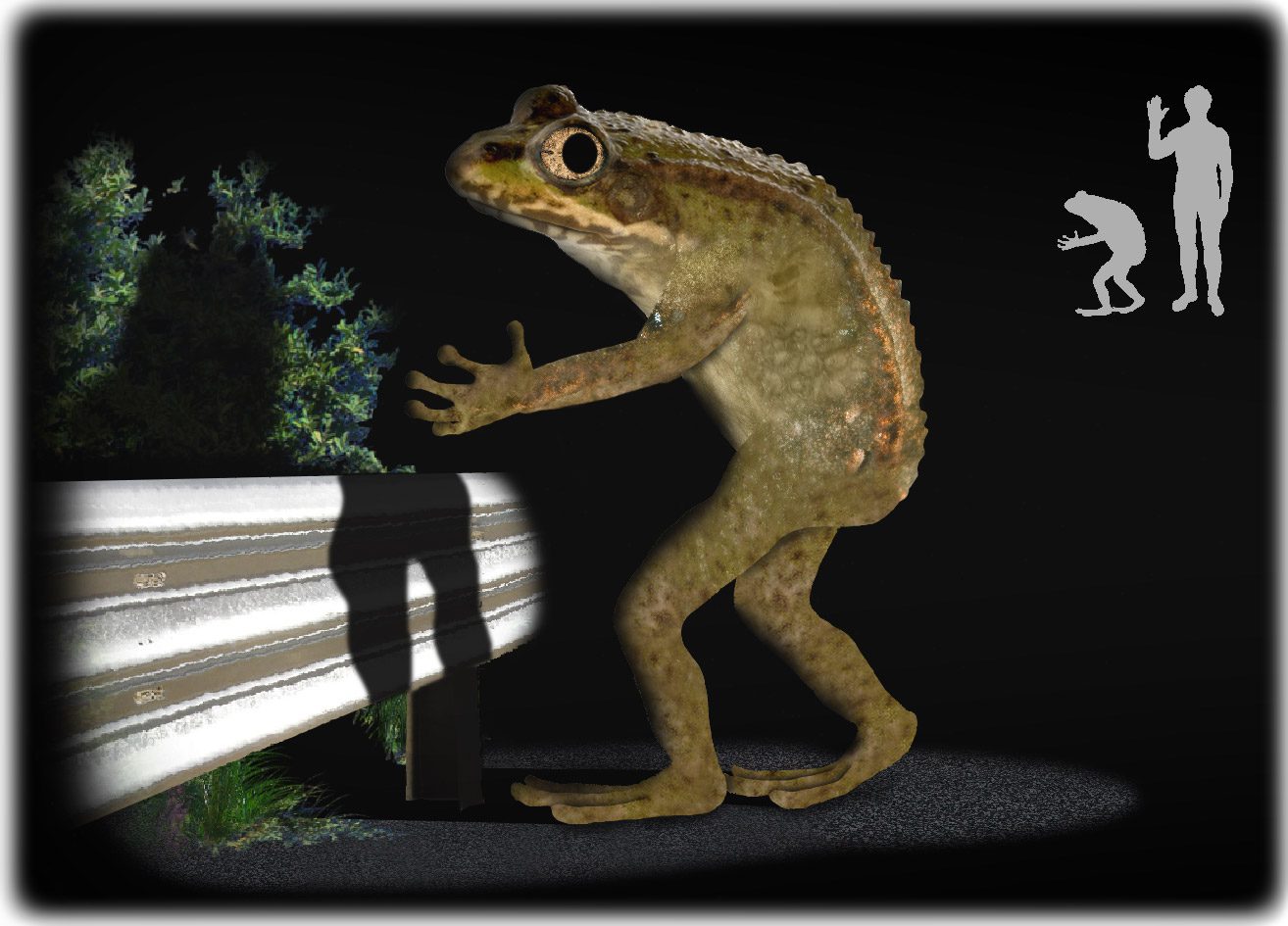 Werewolf Radar
Now I Wanna Be Your Frog

There may be a hellmouth in Cleveland but everybody knows that if you’re looking to stare down a phantasmagoria of the capital S Strange, the word on every pair of psychode-spackled lips in Ohio is Cincinnati. Rumors whispered from the astral plane will tell you that weeks before his death GG Allin married the ghost of Aleister Crowley in the basement of Camp Washington Chili. Multiple investigative mediums claim the room still produces the noise of sloppy spaghetti noodles being thrown over the newlyweds as they shared their first carnal intimacies in public. And to this day witnesses complain that certain grocery aisles trigger vibrant hallucinations of portals to a realm where the reception eternally continues and is both “sticky” and “super gross.”

Those, however, are merely rumors. For truly — and fully corroborated — bizarre tales, intrepid Hauntonauts™ are encouraged to explore those outer realms where the edge of the city blurs into America’s favorite brand of camouflage for the uncanny: The suburbs.

Loveland borders the northeast corner of Cincinnati and hosts just under 14,000 average Americans living average American lives in orderly nuclear units numbering in persons between 4 and 5. Crime is down. Wages are up. Cars from new to like-new are parked in every driveway, shiny targets for bored teens armed with egg cartons full of mischief. Nary a cul-de-sac can be found without a birdhouse-looking cabinet declaring itself the site of that lane’s “Lil’ Ol’ Library” and flaunting mostly Bibles and discarded self-help books with copyrights from the mid-90s.

And behind it all the incessant low croak of Loveland’s horrible secret: The Frog People.

Ask a local and, though stories vary from teller to teller, the beats are always congruous:

It’s sometime in the 1950s. The protagonist is either a traveling salesman or a pair of college students looking to pre-enact Bob Seger’s “Night Moves.”

Whether it’s the salesman seeking roadside bladder relief or the undergrads prepped for a midnight mash they find the perfect vacant stretch of aphotic shoulder and pull over, catching a trio of hooded figures in the headlights.

Before the driver has a chance to alter trajectory and get back on the road they’re gobsmacked by revelations directly from Lovecraft, and for once it isn’t the comfort or frequency with which he drops the N bomb.

Captured by the high beams the frogs, resembling kitchen kids on a smoke break during the interstitial between dinner and late night drunk rushes, cease conversation and — depending on your narrator — literally spring into action. They either leap away beneath a nearby bridge or (in the fanciful manner that every human-sized mutant anything legend deserves) turn toward the car as one of them reveals a magic wand befitting creatures of amphibious origin, and yells something akin to: “Can’t you see we were talkin’ here? Rude!” before blasting a fiery glitterball as if from a Pride parade cannon at the now-in-full-retreat vehicle, planting the half-sprouted seed of a new crypto-saga.

1 a.m. on March 3, 1972: The saga flowers. Officer Ray Shockey is patrolling Riverside Drive. A dark shape flashes through his headlights. Shockey’s cop instincts kick in and he considers running it down and reporting shots fired, but the grim specter of paperwork stops him from acting on his worst possible impulse. Instead he crushes the brakes and skids into cryptid history. A leather-skinned, bubble-eyed frog man is crouched in the road staring back at him. A long moment passes on an early spring breeze and the frog man is gone, vaulted to a river on the other side of the guardrail.

Shockey pulls himself back to reality and files his report, suffering the requisite mockery and even once nibbling one of the deep fried frog’s legs his co-workers keep shoving into his pants past his thin belt line. Two weeks of continual indignities occur before a second member of Loveland’s PD confirms Shockey’s claim. Sort of.

Mark Matthews was on the same patrol route as Shockey had been and, like Shockey, ran afoul of something darting across the road. Unlike Shockey, Matthews immediately went for his gun. Back at the station it was identified as a massive tailless iguana. Seizing the opportunity to skirt further humiliations, Shockey claimed that this, not a frog man, must have been what he’d seen. “Must’ve been,” Matthews said, shaking Shockey’s hand. “Heeeey,” Shockey replied, revealing the frog leg he’d been palmed. Matthews shrugged, looked down the barrel of the camera and gave himself two thumbs up. Executive Producer Dick Wolf.

Official accounts of the frog man’s demise notwithstanding, reports of sightings have continued well into the current millennium. On August 3, 2016 a pair of youths bewitched by the allure of Pokémon Go went strolling into the evening near Lake Isabella in search of, according to reports, a Pikachu, even though they were in a prime location for catching a Gyarados and achieving local gym supremacy. Regardless of their clear inability to navigate the tactical advantage of living near a lake, they managed to find a cute little monster direct from the annals of regional mythology. As they tell it, the big frog they saw perched on a rock near the shore “stood up and walked on its hind legs,” securing yet another entry in an already lengthy list of Ohio’s Weird Stuff.

Could there be a society of Rana erectus out there slurping flies and fashioning magical hand tools? Answers may not be forthcoming anytime soon, but if there’s one thing everybody can agree on it’s this: Dude. Cincinnati rules

Check out Nate’s July install, Rarewolf Weredar: All Along the Squatchtower, or head to our Explore section to see more from this talented creative.

1 thought on “Werewolf Radar: Now I Wanna Be Your Frog by Nate Balding”